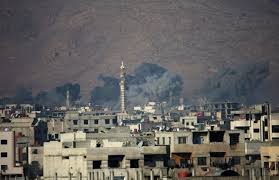 The Syrian Human Rights Committee (SHRC) was able to document on Tuesday (27/02/2018) the death of 37 persons in Syria, including 5 children, 4 women and 1 under torture.

In Damascus Countryside province, 26 civilians were killed due to the bombardment on the towns of the Eastern Ghouta by the Syrian regime & Russian alliance. Victims were distributed as follow: 8 in Douma, 9 in Misraba, 6 in Shifoniya, 2 in Jisrin, 2 in Hazzeh, and 1 in each of Erbin and Hazrma.

In Idlib province, 6 were killed, 5 of them due to the Russian air strikes on Khan Sheikhon, and 1  due to the regime’s artillery bombardment on al-Habeet town.

In Homs province, 2 died: 1 by a sniper fire and 1 under torture in the regime’s detention centres.

One person was executed by ISIS, charged with communicating Sham Liberation corp. in Yarmouk Camp, in southern Damascus.

In Aleppo countryside (2) also were killed due the Turkish bombardment on Afrin rural areas.

SHRC identified and documented 27 names dictated in details on the Arabic web.