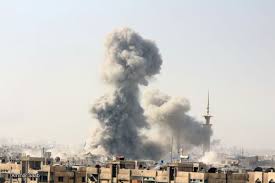 The Syrian Human Rights Committee (SHRC) was able to document on Monday (26/02/2018) the death of 36 civilians in Syria including 5 children and 5 women.

In Damascus Countryside province, 31 civilians were killed due to the bombardment on the towns of Eastern Ghouta by the Syrian regime – Russian alliance. Victims were distributed: 19 in Douma, 3 in Hazrma, 3 in Kafr-Batna, 2 in Harasta, 2 in Hazzeh, and 1 in each of Shifonia and Sakba.

In Homs province, 2 were killed, due to artillery bombardment on Hamimah village, and 2 died affected by their wounds as a result of the regime air force strikes on Tayba / Deir ez-Zor province, four months ago.

In Hama province  a woman died affected by her wounds due to rockets attack that targeted Zafr-Zita few days ago.

SHRC identified and documented 30 names dictated in details on the Arabic web.