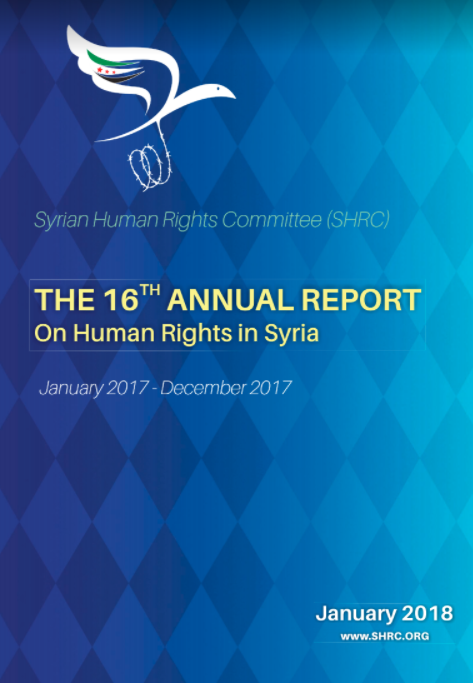 The Syrian Human Rights Committee (SHRC) issued its annual report on the situation of human rights in Syria for the year 2017. The report deals with the widespread violations committed by different actors in Syria, in addition to violations committed against Syrians refugees in neighboring countries.

The Syrian regime remains the first in the list of violators against Syrian civilians, and has been responsible for killing of (6994) civilian, approximately 56% of the victims this year, followed by the Global Coalition Forces (1908), ISIL (1756), and Russian air forces (1459).

Throughout 2017, Syria continued to see vehicle bombings in addition to suicide attacks, killing hundreds of civilians. The annual SHRC report has documented the detonation of (23) cars and motorcycle bombs this year.

The year 2017 has shown rising numbers of victims due to land mines, which were planted mostly by ISIL. All landmine accidents were either planted on the borders of the areas controlled by ISIL, or in areas where of the organisation was forced out. SHRC documented the killing of (754) people in 2017 due to land mines.

Syrian regime authorities continued to detain tens of thousands of Syrians in its prisons on so called charges of ‘terrorism’, as the official pretext for political arrests. Thousands of Syrians serve sentences ranging from 3 to 20 years after being brought before the so-called “Terrorism Court”, while no charges have been brought against thousands of others.

Most arrests are considered “geographical arrests” rather than “political arrests,”. All detainees during the past few years are associated to areas outside of regime control or that were outside its control at one point, regardless of actually participating in any anti-regime activities. Those arrested on the basis of their participation in political or military activities against the regime are not referred to the normal prison, but kept in detention centres under the hold of security services, and often end up dying under torture.

Prisoner swap deals between different parties and actors on Syrian territory produced the most relevant forms of releases this year. As in previous years, swap deals included the release of women, children and the elderly, in addition to corpses.

Exchange deals are conducted either prior to exit of fighters from an area or reached at a bargain. Fighters who hold prisoners or corpses, and won’t be able to take them along with them execute deals with the regime or associated militias, through local or regional mediation processes.

Regime forces continued their use of sieges as a primary weapon to punish areas controlled by armed opposition factions. However, in comparison to the past five years, 2017 witnessed a reduced use of this weapon regarding the besiegement of certain areas or trapped populations. According to SHRC annual report, this reduction is attributed to two main factors, firstly: the regime regaining control over a number of areas that were besieged in previous years. Under strict siege the regime succeeded in reaching agreements with the opposition factions to ensure their exit along with civilians, in exchange to handing over the region to regime forces.  Secondly: regime forces were able to break the siege which was imposed by ISIL on Deir ez-Zor’s central area for several years.

The targeting of the medical and emergency sector continued as one of the features of war in Syria during previous years. The months of February, March, April, and May saw the worst acts of targeting hospitals and medical centres.  It is concluded that no hospital or medical center in Daraa or Hama countryside were exempt from shelling, at least once during this time period.

Tracking attacks by the regime and Russian air forces show that they were deliberate and systematic. They targeted hospitals away from residential areas to demonstrate the clear intent of these forces in targeting medical and health centres. SHRC’s documentation of 2017 highlights the targeting of (61) hospitals and medical points, (22) of which are in Idlib province. SHRC has also documented the killing of (24) medical cadres.

SHRC has documented the killing of (41) members of the civil defence, the injury of (62) other members, in addition to the targeting (18) civil defence offices and (42) ambulances.

It is believed that those killed in Syria during the previous years due to a lack of medical services, inability to access them or who have suffered complications as a result of the war (such as cardiac arrests) outnumbered those killed by direct targeting.

Targeting the media sector continued in 2017, as Syria ranked the second worst in the list of the most dangerous countries in the world for journalists. SHRC has documented the killing of (24) journalists and media activists beside the injury of (17), mostly due to indiscriminate shelling, bombing and shooting whilst the journalists covered the clashes.

Various violations led to the ongoing tragedy of displacement and asylum seeking, whilst Syria continues to be ranked first globally in the number of refugees. At the beginning of March 2017, Syrian refugees exceeded the threshold of five million for the first time since 2011, reaching the number of  5.4 million by the end of the year, with the total number of displaced people inside Syria reaching 5.7 million. This is in addition to being ranked the first globally in the numbers of both the displaced and refugees.

The situation of Syrian refugees in Lebanon is viewed as the worst compared to other counties who host Syrian refugees.  Violations of refugees in Lebanon include acts of arbitrary arrests, degrading treatment and torture on the hands of the Lebanese Army, various security apparatuses and semi-official militias. Refugees are often deprived of the UN assistance allocated to them, due to the refusal of pro-regime political groups agreeing to establish official refugee camps, similar to those of other refugee hosting countries.

The year 2017 saw a large number of arrests among refugees who returned to Syria, including cases of death under torture- which has been frequently documented for returnees.

The regime’s security authorities arrested all male adults returning to Syria, sometimes females too, particularly when the woman returned on her own or was the breadwinner of her family. Arrests last for a few hours, or for longer periods. Arrest period depends on the nature of the activities carried out by the person and his family during their exile, on their financial situation and that of their relatives: whether or not they can pay bribes for their release.

Most actors on the Syrian land continued to target displaced people in their temporary places of residence or even in their displacement. The motivation of targeting varies depending on the targeting party. The significant strategy employed by ISIL is to prevent civilians from fleeing the conflict and using them as human shields. The regime and Russian forces resort to other strategies by pushing civilians to move to other areas, or to cross the Syrian borders for geopolitical purposes, or to punish the social incubators of certain factions.

The SHRC annual report saw the continuity of targeting places of worship, particularly mosques, at a high rate, albeit less than the last year. SHRC has documented the targeting of (90) mosque and one church throughout 2017.

The Syrian Human Rights Committee is an independent organisation, founded in 1997 and based in London. It is among the earliest human rights organisations in Syria. It has regularly maintained a dedication to publish an annual report on the situation of human rights in Syria, since 2001.