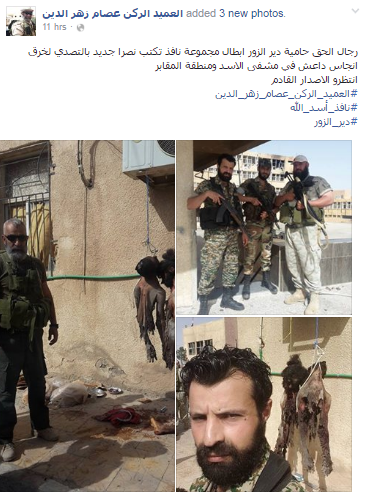 The Syrian Regime has announced the killing of Brigadier-General Isaam Zahr al-Deen in Hawijat al-Sakr, Dayr Az-Zour, by a land-mine explosion.

Zahr al-Deen is among the most prominent militia leaders produced by the Syrian army, who enjoyed powers outside of the military establishment alongside immediate supervision from the presidential palace. He formed his own special group called “Nafidh Asadullah”.

Zahr al-Deen was directly responsible for the implementation of a number of massacres, in particular the famous massacre of the Baba Amru district of Homs in 2012. In 2013, he was transferred to Dayr Az-Zour where he has been committing massacres since.

Zahr al-Deen hails from rural as-Suwaida’ and his grandfather was the Chief of army staff. Zahr al-Deen has been directly responsible for a large number of crimes against humanity and genocides since 2011.

On 17/5/2016, Zahr al-Deen published pictures of himself on his facebook page alongside cut up human bodies, whom he said belonged to ISIS officers from Dayr az-Zour. The cut up human remains reveal that Zahr al-Deen and his men would cut up dead bodies, as well as their pride in doing so.

On 10/9/2017, Isaam Zahr al-Deen said to the Syrian regime media that he hopes that none of those who left Syria to another country will return, and that if the state did allow them to return then he will never forget and never forgive (those who left). He then added in the local dialect: “this is advice from my chin- none of you return”.

The European Union had added the name of the war criminal Isaam Zahr al-Deen to its sanctions list on 17/7/2017.