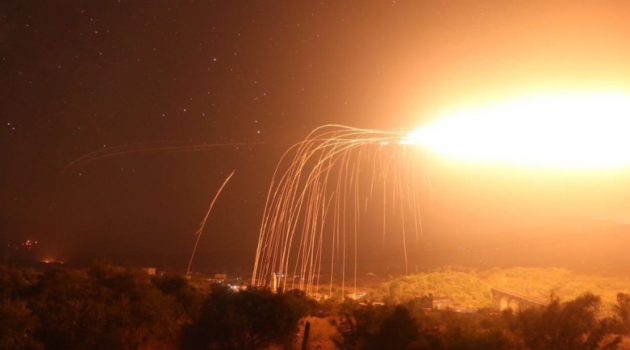 Russia’s involvement in the Syrian conflict which began two years ago today, has created a turning point in the numbers of those killed on the ground and in human rights violations, which has transformed and surpassed the previous violations on a totally different level.

Since day one, Russia has implemented a “Scorched Land” policy in its military agenda, the same as which it used in Grozny during the 1990s and which caused monumental destruction in the areas it targeted.

Russian operations have been marked by an excessive use of war planes of high firepower, in contrast to regime war planes which have limited accuracy and conventional low-impact missiles.

Russian operations have also been marked by a high use of internationally forbidden weapons, in particular phosphorous and cluster bombs, which have been used in a widespread manner in all areas targeted by the Russians.

The Russian military operations have also been characterised by their high targeting of civilians, with its targeting of places of gathering and its targeting of vital institutions, in particular hospitals, medical points, medical staff, civil defence centres and staff, and relief convoys and organisations, committing hundreds of documented war crimes as a result.

According to SHRC documentation, 6304 people have been killed directly by Russian military bombing during the past two years. On average, this is approximately 262 people per month.

Since the first day of the popular uprisings in Syria which began in 2011 and until now, Russia has secured the legal and political protection of the Syrian regime in order for it to continue carrying out its acts of killing and murder. In addition, Russia has provided technical and logistical support to the regime, and since its intervention it has become the upper hand in Syria, holding political responsibility for all foreign groups in the country which are supporting the Asad regime. As such, Russia holds responsibility for all the acts of killing carried out by the Syrian regime both before and after its direct intervention. It also holds responsibility for the acts of killing carried out by Iranian forces and their sectarian militias following its intervention.

Russian attacks have almost all  been carried out against areas which fall under the control of the armed opposition, with very limited attacks documented against ISIS areas, even though the Russian government claims that it intervened in Syria to fight ISIS.

The Russian military operations, which have taken place in parallel with a program of strengthening diplomatic relations with regional states and another involving direct talks with key players, have provided a lifeline for the Asad regime which was at the brink of falling in the weeks prior to Russian intervention, according to statements made by the Russian Foreign minister.

The Russian intervention derives its legal legitimacy from the invitation offered by the Syrian regime, whose continued legitimacy is a result of the failure of the international community in addressing the Syrian issue. The institutions of this community, and in particular the Security Council, hold great responsibility for the crimes committed by the Syrian regime and its foreign supporters- in particular Iran and Russia.

On this day, SHRC remembers all civilian victims in Syria for whom Russia is responsible for killing- both directly and indirectly. SHRC calls upon the international community to fulfil its duties in taking all war criminals to account, including Russia and Iran, and in removing all foreign forces from Syria and working towards a political solution which is fair for the victims and involves taking the perpetrators to account.