You are here: Home / Editors choice / Destruction of al-Rahma Hospital in Khan Sheikhoun 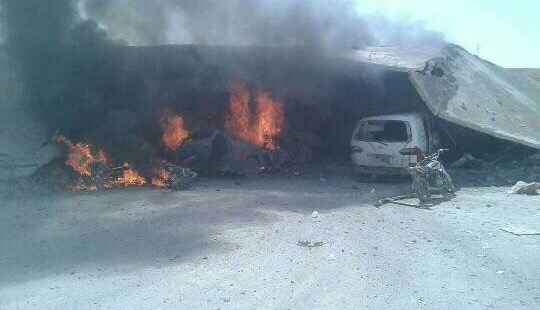 Russian warplanes targeted al-Rahma Hospital in Khan Sheikhoun in the southern suburb of Idlib with four consecutive attacks, destroying a significant part of it, and rendering it out of service whilst also burning ambulances parked in its vicinity.

This is not the first time that Al Rahma Hospital has been targeted. It was targeted last April, although this strike has carried the heaviest repercussions and suffering. There have been no reports of human casualties so far

Targeting of hospitals is a major violation of international treaties that have affirmed the safety of civilians and patients and not targeting them or targeting the medical buildings in which they are located.

The Syrian Human Rights Committee condemns this heinous attack and holds the Russian and Syrian regimes responsible for it. It calls on the international community to intervene to preserve the safety of patients and civilians, hospitals and medical centers, and considers the attacking of such places amount to war crimes.