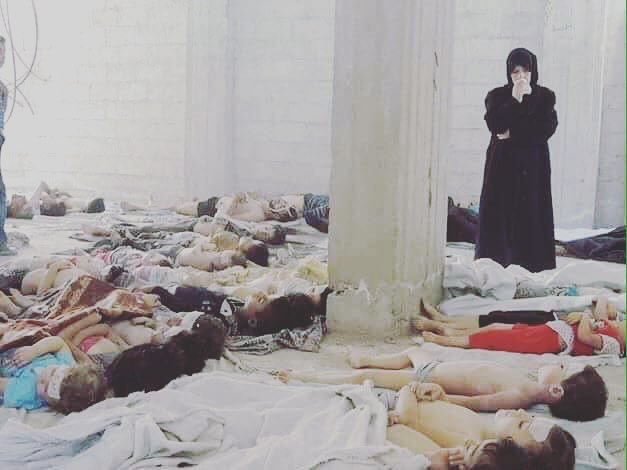 On 21/8/2013, the Eastern Ghouta was subjected to bombing with missiles containing poisonous gases. Within a couple of hours, 1300 people had died and approximately 2000 were suffering from various levels of suffocation. This attack came to be known as one of the worst massacres Syria had seen since the uprisings began in 2011.

At the time, the chemical attack unleashed a large international response and became the focus of international media and diplomatic circles, with Washington considering military action against Damascus. However, the American president at the time- Barack Obama- backtracked against this idea and the US secretary of state and his Russian counterpart began lengthy discussions which ended with the signing of a joint programme in which the Syrian regime was to hand its arsenal of chemical weapons to the Organisation for the Prohibition of Chemical Weapons (OPCW) to be destroyed on board a US ship. This agreement was also approved by the Security Council resolution 2118.

However, like all other resolutions regarding Syria, the resolution did not accuse any side of the attack and sufficed in referring to the Syrian regime in an implicit manner.

Despite the fact that the Syrian regime handed over its chemical weapon arsenal, the attacks with chemical weapons continue, the last of which took place in Khan Sheikhoon on the 4/4/2017 and in which 104 people were killed. Once again, the Khan Sheikhoon attack became an international point of focus for a number of days, especially after the US launched a strike on the airport from which the planes which bombed khan sheikhoon took off.

On 13/1/2017, the International Independent Investigation Commission on the Syrian Arab Republic had- for the first time- produced a list of military and political figures within the Syrian regime, accusing them of giving orders for the use of poisonous gases in attacks during 2014 and 2015. The list included the president Bashar al-Asad and his brother Maher al-Asad. This is whilst the United Nations and most countries of the international community are calling for direct talks with Bashar al-Asad, guaranteeing his remain in power for at least the transitional period.

The insistence of the international community in ignoring criminals and providing them with endless opportunities to escape punishment has only encouraged them to commit more crimes, and allowed for the further needless murder of half a million Syrians and the migration of half of all Syrians from their homes.

On the fourth anniversary of the Eastern Ghouta chemical massacre, SHRC calls for all efforts to be made towards taking perpetrators to court, and reminds that any political solution which allows war criminals to escape justice- let alone which leaves them in positions of power- only widens the circle of violence and pushes more youth towards violence and extremism.