You are here: Home / Editors choice / Gunshots at a Humanitarian Convoy in Harasta 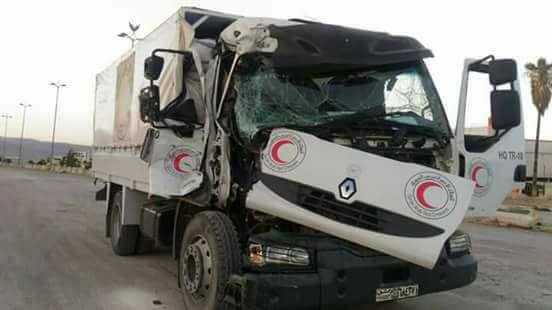 A UN humanitarian convoy was exposed to gunshots on Saturday evening, resulting in the injury of two people.

The convoy- a joint effort between the UN, the Syrian Red Crescent, and the International Committee of the Red Cross- which is made up of 36 lorries, was exposed to gunshot on the Damascus-Homs highway, close to the ministy of irrigation. Drivers of the Red crescent were left injured.

The representative of the UN’s projects in Syria did not accuse any side in his press release, however, civil institutions in Harasta accused the Syrian regime, especially as regime forces had delayed the convoy when lifting the barriers at the city’s checkpoints, providing the excuse that it did not have the machinery to lift the barriers.