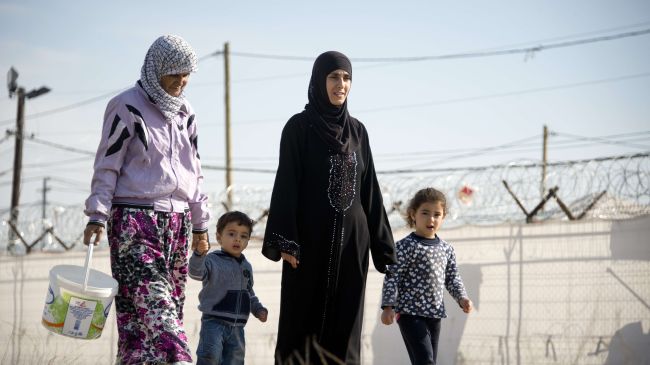 Since 2011, Syrian women have paid a very high cost as a consequence of the violations and crimes committed continuously in the country. An indispensable part of the Syrian tissue, women have been exposed to violations which do not distinguish between men and women, young and old, such as random bombardment, forced displacement and besiegement. However, Syrian women have also suffered from violations specifically targeted at them due to their gender.

The violations targeting Syrian women throughout the last six years can be summed up in four manifestations:

The Syrian regime forces and its related militias have used rape as a weapon to terrify areas in which opposition movements are popular. This was especially the case between 2011-2012, in which the highest incidents of rape were documented in the Homs governorate.

According to confessions made by the regime security officers who were seized later by opposition armed groups, the rape operations aimed to drive people out of their homes and villages and to make them refugees in neighbouring countries. Evacuating vast areas from their residents helped to quell the opposition movements.

Documented confessions by elements of the security services have revealed that women were kidnapped at security barriers and raped during home raids, as well as at security branches, in remote villages and even in village squares.

Following his arrest by opposition forces, the previous commander of the Homs Air Force security branch brigadier, Abdelkareem Alnabhan, confessed that: “The Syrian people have a high sense of honour towards women. Therefore, the regime experimented pressurising them through kidnapping women and young girls and blackmailing their families and punishing activists by raping their wives.

In a number of cases documented between 2011-2013, the regime apparatuses and related militia kidnapped girls from opposition villages, then sent them to villages supportive of the regime where they were raped and tortured collectively. The aim of this was to discharge hatred among supportive residents who lost some of their members in battles with armed opposition groups.

Rape was not only conducted by Shabiha thugs and the Syrian security services; several testimonies pointed to the participation of members of the Lebanese Hezbollah- which is fighting alongside the Syrian regime in Syrian territory- in acts of rape, and especially in Homs, where the victims were able to identify the identity of the rapists through their Lebanese dialect.

Sexual accusations have been used as a weapon by the Syrian regime prior to 2011, but such campaigns took a more organised style later. Throughout the recent years, regime owned media televised a large number of interviews with female detainees, some of them minors, whom – according to the interviews- talked about their practising of illegal sexual acts either with their consent or being forced to do so by their opposition parents.

On 11/8/2013 the regime official Akhbariya channel broadcasted a program called: “Sharia (law) against Islamic Law” where it presented young girls who said that they practised “sexual Jihad”. The program described the sexual relations practised by the girls in detail, and showed a film in which the girls were apparently arrested by the Syrian security authorities. Some of the victims were minor girls presented with their full names.

On 22/9/2013, the Akhbariya channel broadcasted an interview with a minor girl with her full name. She claimed that her father used to host opposition fighters to practise illegal sexual relationship with her, and that her father told her that such relations is part of Jihad and that she earns good deeds from such acts.

These televised accusations are a direct violation of local and international laws: the testimony of the accused is not sufficient evidence in criminal law, and cannot even be relied upon to judge and issue a sentence.  This is notwithstanding the conditions of prisons in Syria, which are known to be among the worst in the world with their excessive use of torture and inhumane treatment. Therefore, all testimonies that are taken from detainees are illegal and not credible. Displaying them only constitutes a further evidence of the inhumane treatment towards detainees through insisting on the practice of torture, and long-term degrading treatment towards female detainees and their families through their appearance on TV screens.

All those whose confessions were presented on regime media were abducted without any arrest warrant, and without taking into account the minimum legal requirements accepted. In fact, their parents only knew of their abduction after viewing their testimonies on television.

The use of children in such propaganda constitutes a grave breach of the Convention on the Rights of the Child and the International Covenant on Civil and Political Rights. It also constitutes a breach of both codes of conduct and the rules of the profession generally accepted among journalists.

Thirdly: The use of Women to Blackmail

The Syrian regime has long used the policy of kidnapping women and detaining them in order to punish their opposition male relatives.

According to many testimonies documented by SHRC since 2011 and until now, the greatest number of women kidnapped and imprisoned in this period were due to family ties to opposition members, in order that such opposition members hand themselves over, or to pressurise detainees to make confessions under the threat of raping the concerned woman or actually raping her as a method of torture.

Early marriage was a major problem faced during childhood in Syria prior to 2011. After 2011, the rates of early marriage rose dramatically, especially among girls, given the economic and social conditions experienced by Syrians, and especially in refuge countries.

There are no quantitative indicators for early marriage rate in Syria at present, but the indicators in the refuge countries refer to a record high, which is expected to resemble the situation inside Syria. International studies have shown that 51.3% of the refugee girls in Jordan married before reaching the age of eighteen years, compared to 13% for male children.

Most of these marriages are conducted as a result of the parents financial need, or as a result of what they believe is the protection of the child from the targeting of others, including the refugees themselves.

In areas controlled by ISIS, SHRC has documented a large number of cases carried out by elements of the organisation conducting marriage contracts in the areas they control, and without the consent of the girls. Parents are marrying their daughters either to elements of the organisation in order to obtain privileges at the organization, or in order to secure protection for their family.

Observing the violations suffered by Syrian women over the past six years reveals that they have paid the price of war twice. They have also suffered long-term abuse, which cannot be relieved of its implications throughout the current generation.

In addition to the depth of suffering faced by Syrian women, the current circumstances of the country means that it lacks the institutions that can provide care and support for victims, especially victims of rape, torture and sexual harassment. This only serves to increase the depth and impact of the violations at present.

On International Women’s Day, the Syrian Human Rights Committee (SHRC) recalls the seriousness of the horrendous violations taking place in Syria since 2011. Whilst stressing that most of these violations do not distinguish between any segment of society, SHRC notes in particular the abuses suffered by Syrian women who are unable to express most of the violations they suffer, and do not have enough  means to counter the effects of these violations.