When the revolution began in the middle of March 2011, Syria entered an unprecedented stage of violence committed against its civilians by the regime. The number of daily human rights violations has surged, making it difficult for the different human rights organisations to track. The death toll and arbitrary detentions have reached unprecedented numbers.

Syria entered a similar phase in the late 70s that ended with the infamous 1982 Hamah massacre, in which the regime committed a series of serious human rights violations on various levels, some which remain vague and unknown. However, the events taking place in Syria since March 2011 are different in terms of documentation and access to information. Although the Syrian authorities have banned official media channels from entering Syria and working there, thousands of local journalists in several Syrian governorates have been able to intensively document the violations committed by the regime in a manner which other press and human rights organisations have been unable to.

These local journalists were able to take advantage of modern technology, telecommunications and media. For example, more than two million videos about Syria were uploaded in 2011 and 2012 while tens of Facebook pages work 24/7 on publishing these videos; turning them into reliable sources for international media and human rights organisations.

Despite the efforts made by the local journalists alongside local and international human rights activists to immediately and professionally report and document the true size of the daily violations committed in Syria, the international community’s response to the on-going war crimes and crimes against humanity has been disappointing so far. In fact, its weak response has been a contributing factor which has encouraged the Syrian regime to commit more crimes and have them recorded and praised by its spokespeople.

The events which have taken place in Syria during the last two years are considered among the worst and most dangerous violations of human rights; however the UN council has not been able to condemn these crimes due to the stances of Russia and China. Moreover, the USA and Europe have not played any impactful role in ending these crimes due to international politics.

The fact that some countries have insisted on the regime’s impunity and protection from accountability and the fact that some parties are being forced to give compromises in their dealings with the regime, are both setbacks in the international community’s steps towards building strong foundations of accountability. These foundations were enhanced in the Rome Statute of the International Criminal court in 2001 but have now weakened as seen in the lack of action towards the violations committed in Syria.

Each chapter of this report, attempts to give an overall description of the violations committed in Syria in 2011 and 2012. However, unlike previous reports, only a general description and some examples will be given due to the inability to track and explain each case of the hundreds of thousands of killings, detentions, tortures and rapes that have occurred.

Most of the violations committed in this period were planned. For example, children were killed while arbitrary detained prisoners were tortured. Cities were besieged and shelled continuously whilst all means of aid were cut off, leading to the death of civilians in their homes, the death of the injured due to the lack of medical aid and the death of babies due to the lack of milk. At the same time, the Shabiha carried out massacres in the outskirts of these cities and raped and displaced their inhabitants.

The report attempts to differentiate between the crimes committed for research purposes only. However, readers will notice how these crimes overlap in several chapters. 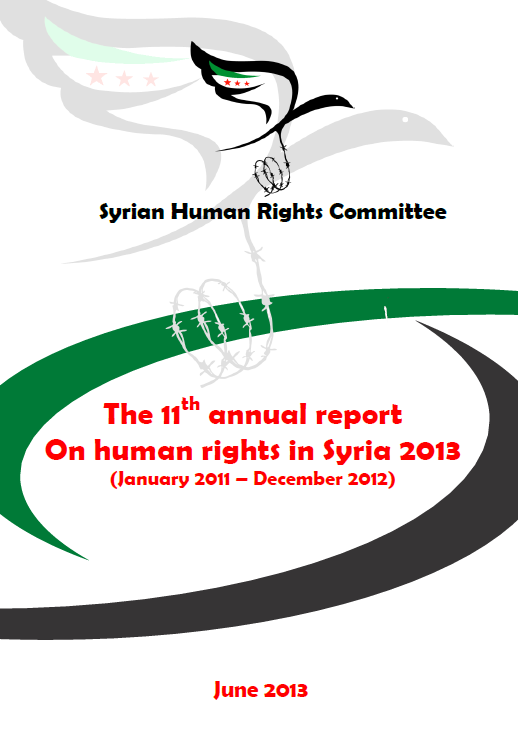