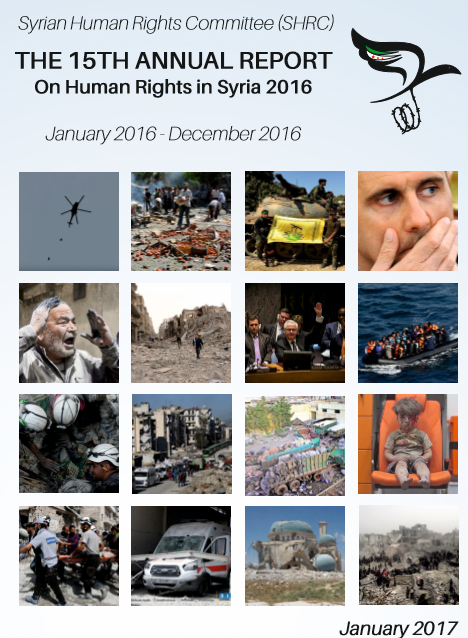 The Syrian Human Rights Committee (SHRC) published its annual report on the state of human rights in Syria for the year 2016. The report, which is the 15th annual report since 2001, shows the extensive violations committed by the various parties involved in the conflict.

As the duration of the conflict in Syria continues, the list of contributors to the crimes and violations committed against the Syrian people also continues to grow larger. This report has documented the violations committed against the Syrian people by the Syrian Army, Iranian forces, Russian forces, Lebanese militias, Iraqi militias, Afghan militias and the International Coalition against ISIS which consists of more than twenty countries. In addition, the variety of weapons used and types of crimes and violations committed have also grown in both number and size, marking the past six years which Syria has witnessed as one of the greatest tragedies occurring in the 21st century undoubtedly. 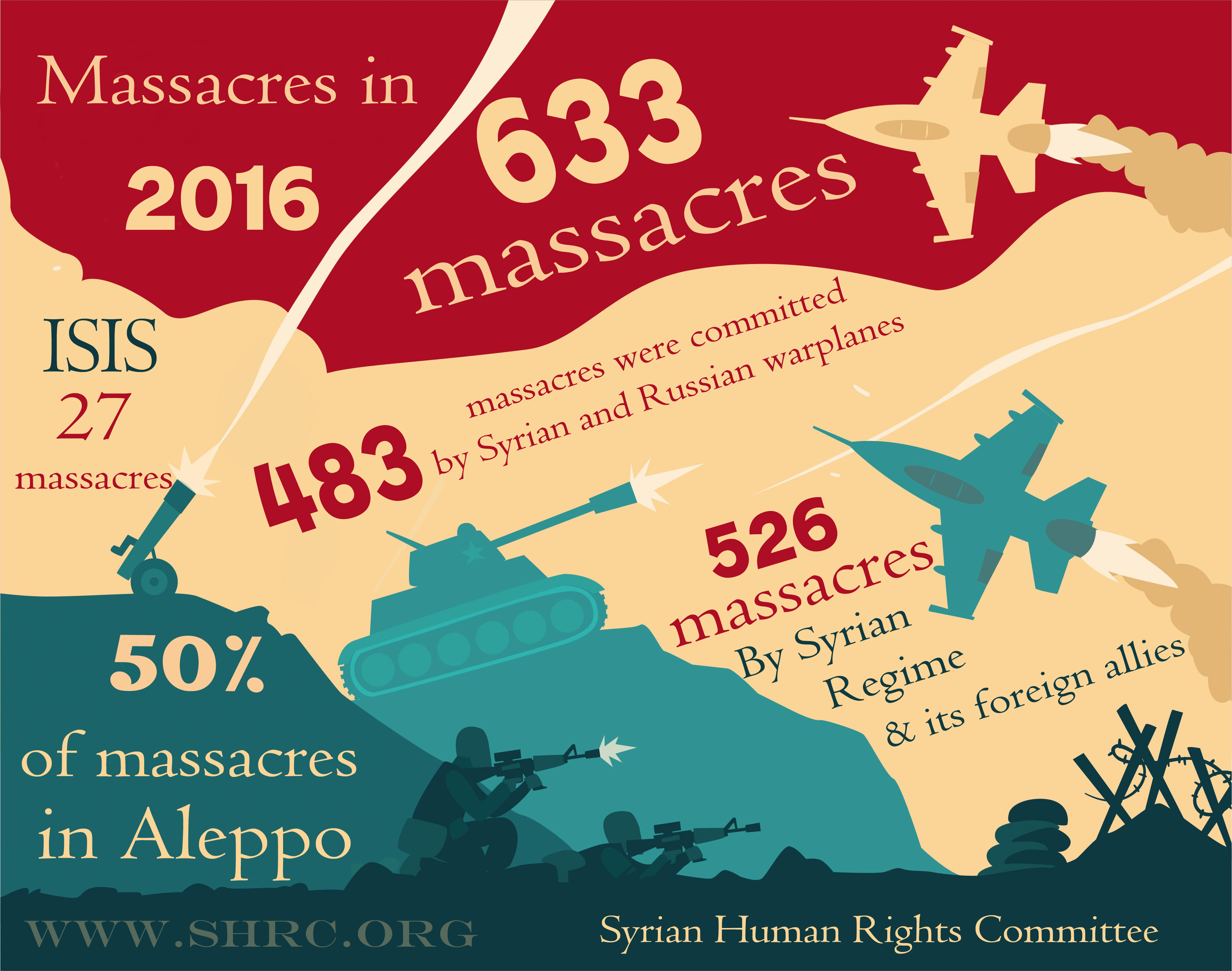 The 15th annual human rights report shows the continuation of bloodshed in Syria. SHRC has documented the death of 19,524 people in 2016, approximately 1 person every 27 minutes. Among these victims, 2779 were children while 1652 were women.

As was the case in 2015, warplanes were the main weapon used against the Syrian people in 2016, as they were used in 483 of the massacres committed, compared to 413 in 2015. Dropped barrel bombs alone killed 4,769 people, totalling up to 24.4% of the victims recorded this year.

As in past years, the Syrian regime alongside its foreign allies have shown a clear intent to target civilians in their gatherings and lively locations. Markets, shopping centres and bakeries were unceasingly targeted. SHRC has recorded 78 attacks on such areas, 17 of which were bakeries. Markets were often targeted during peak times such as mornings in cattle markets, afternoons in fruit and vegetable markets and evenings during the holy month of Ramadan. 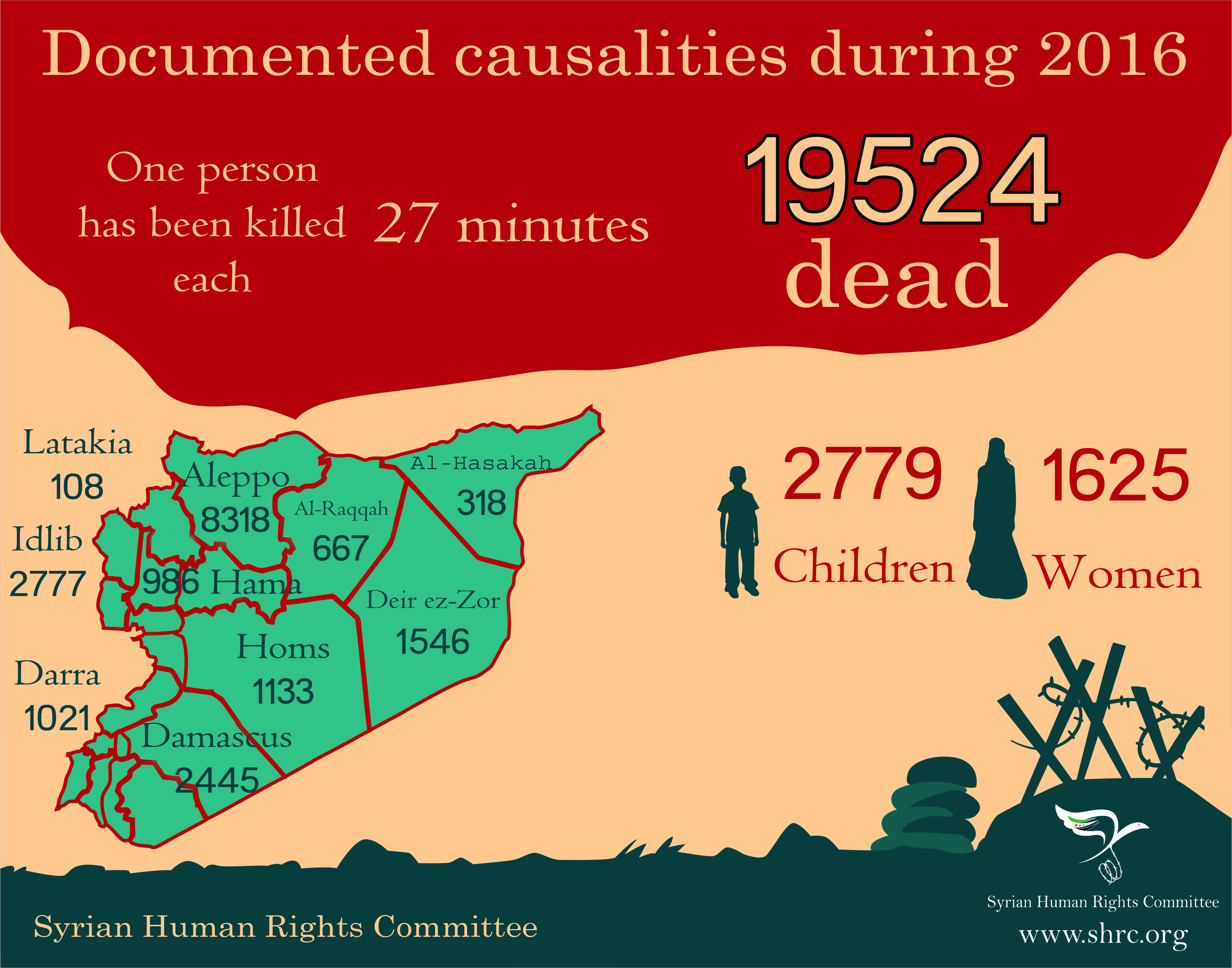 As in previous years, the Syrian Armed Forces and its foreign allies used internationally prohibited weapons heavily. The use of cluster bombs, phosphorus bombs and fission bombs increased significantly since the Russian Air Force began its operations in Syria in the last quarter of 2015. Since then, these weapons have been used heavily and daily.

This year, new unprecedented weapons were also used; mainly hypersonic missiles which create vibrations in ground levels and cause buildings to collapse even days after being hit. Other weapons include explosive hoses and cylinders in addition to the weapons used in 2015, such as naval mines and sea-crossing missiles.

And as in previous years, ISIS remains in the lead in terms of documenting and marketing the atrocities it commits. This year, ISIS released several videos documenting new methods of killing alongside its previous ones.

The Syrian regime’s forces continued carrying out arbitrary detentions in the various regions in controls. Most of these acts take place at the various street checkpoints, at border crossings and at Damascus International Airport.

The Syrian Armed Forces also escalated its attacks on the healthcare sector, its staff, venues and equipment in 2016, in a continuation of its strategy that it has been following since 2011. SHRC has documented 142 incidents in which hospitals and medical centres were targeted this year, in addition to 92 incidents in which ambulances were targeted. Medical staff were also continuously attacked; SHRC has documented the death of 27 members of medical staff, 17 of whom were doctors, doctors’ assistants or pharmacists.

Moreover, emergency and relief sectors were continuously targeted, as the warplanes, Russian warplanes especially, attacked the civil defence, its members, offices, equipment and vehicles. In total, 46 civil defence centres were attacked while 47 civil defence members were killed and 64 of them injured.

In addition, the Syrian Armed Forces alongside Russian warplanes continued targeting relief workers, including those working for the Red Crescent; an organisation that actually works in coordination with the Syrian regime, in the areas under its control and under its supervision. The report has documented the death of 14 members of the Red Crescent throughout 2016, in addition to 7 attacks on aid convoys: 5 of which were in Aleppo and Idlib and 2 in Rif Dimashq.

With regards to education, SHRC has documented 132 incidents in which educational institutes were targeted this year, 113 of which were attacked by the Syrian regime’s forces and Russian warplanes. As in the last few years, education in Syria was seriously impacted due to the ongoing airstrikes over schools, the military operations taking place on the ground in many regions, the displacement and immigration of a large number of academic staff, school buildings being used as shelters for displaced people and the difficult economic conditions which the targeted areas are going through.

For the fourth consecutive year, Syria remains the number one country on the list of most dangerous countries for journalists and also holds the top position on the list of most restrictive countries for the freedom of journalism. SHRC has found that 59 media personnel were killed throughout 2016, and 43 others were injured, mainly due to the indiscriminate shelling and firing that took place while they were covering the clashes. .  In addition, 11 media personnel were detained or kidnapped this year; 6 by al-Nusra Front, 2 by the Kurdish People’s Protection Unit (YPG). The parties responsible for the remaining 3 incidents remain unidentified. Many media offices and institutions were also targeted this year: 3 in Aleppo and Idlib by al-Nusra Front and 6 in Rif Dimashq by warplanes. As in 2015, the largest number of victims among media personnel was among media activists in 2016.  This is due to the nature of their work and their presence at the front lines of any armed clashes, in addition to  the  lack  of  safety  equipment  used  by  professional  journalists  such  as  bulletproof vests and the lack of safety courses and training.

The refugee and displacement crisis has continued for the sixth consecutive year, as the numbers of refugees registered with the United Nations by the end of 2016 reached a total of 4,861,112 refugees; 470,673 more than the previous year. In addition to migrating abroad, 6.3 million Syrians have been displaced within the country itself; 300.000 people fewer than those in 2015. However, this year saw a rise in the incidents attacking displaced people. SHRC has documented 36 incidents in which displaced people were targeted throughout the last months, mainly by the Armed Forces’ artillery which shelled the camps in which displaced people are staying, especially in the countryside of Idlib. The Syrian Armed Forces and Russian warplanes were responsible for 28 of these attacks, while ISIS was responsible for 8 of them. In contrast to previous years in which people would abandon their homes sporadically, this year saw an unprecedented use of forced migration in an organised and regulated manner, as specific areas were targeted for specific reasons in order to force their residents to leave. SHRC has found that a minimum of 50,000 people have had to go through systematic forced migration this year, 40,000 of which were from Aleppo’s eastern neighbourhoods alone and 5,000 of which were from Darayya in Rif Dimashq.

Furthermore, Mosques were continuously targeted throughout 2016. SHRC has documented 140 incidents in which mosques were attacked, 41 of which were by Russian warplanes and 84 of which were by the Syrian regime’s forces. Weekly congregational Friday prayers were cancelled several times consecutively due to the intensified airstrikes and raids on civilian gatherings, especially in Aleppo and the northern countryside of Homs. On 29 April 2016, the congregational Friday prayers were cancelled in Aleppo for the first time since 2011. It was also cancelled several times in the last quarter of 2015 in  the northern countryside of Homs following Russian airstrikes over the area.

On the other hand, attacks against archaeological sites have decreased significantly in 2016 compared to previous years. SHRC has documented only 10 incidents in which such sites were targeted this year, most of which only caused slight damage. In contrast, archaeological sites were targeted directly in previous years, especially by ISIS, which planted explosives in many of these places in 2014 and 2015.

As the conflict in Syria enters its 6th consecutive year, the level of violations and crimes committed against its people also reached unprecedented rates in modern documented history. Even though many equally brutal crimes have been committed elsewhere in Africa and other regions in the last few decades, very few of them have been well-documented as the Syrian conflict has. Despite this, very little has been achieved to stop these violations and crimes or even reject them by the International Community, which has failed miserably in addressing the crisis. Even global civil organisations have failed to condemn or have a clear stance regarding these crimes.

Despite the level of violations committed against human rights in Syria, which have been widely documented by both local and international organisations- including the UN and its various bodies, the International Community’s response towards these crimes has been so weak, to the extent that it has violated human rights instruments.

Many countries have condemned these crimes on several occasions, and many international attempts to issue resolutions to condemn these atrocities have also been made. However, these efforts have rarely pinpointed the main perpetrators behind these violations, and in the rare cases that they have, they have failed to hold them accountable or punish them.

The atrocities committed in Syria since 2011 have been systematically performed using every type of weapon imaginable against the Syrian people, their homes and their institutes.