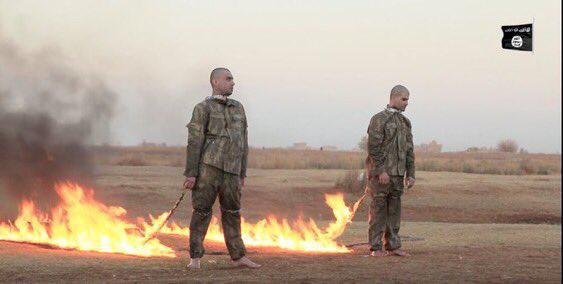 ISIS have published a video in which they burn two Turkish soldiers alive. The soldiers were abducted by the group in late November, close to the city of al-Bab in rural Aleppo in the Dara’ al-Furat battles.

In the video, one of the soldiers says that his name is Fethi Sahin from the city of Konya and that he worked as a border intelligence guard. The other soldier identified himself as Sefer Tas and said that he worked at the Mehmed Police Station situated on the border with Syria.

Following a speech delivered by an ISIS soldier in Turkish, another ISIS soldier is recorded taking the two Turks- still wearing their Turkish army clothes- in a humiliating manner and setting the fire on them, in a manner similar to the burning of the Jordanian pilot Muath Kasasbeh, who was burnt by ISIS on 4/2/2015.