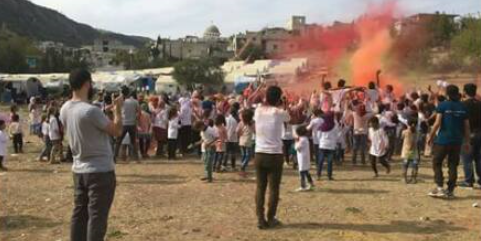 Activists of the Inspire Team were arrested due to a party they held for children at a displaced camp in rural Latakkia.

On 1/11/2016, a Shariah Court of the Fath al-Sham group (formerly An-Nusra Front) decreed the release of civilian activists on bail, after they had been sentenced to prison and fined. The court terminated the prison sentence due to what it described as consideration of the “conditions of war”.

Forces of An-Nusra had arrested Firas Haj Omar, Abdul Jabbar Khalil, Mohammed Ahmed, Mahmoud al-Sheikh, Mohammed Dandash, Mohammed al-Hasan, Ammar al-Aswad- volunteers of the “Inspire Volunteer Team”- on 26/10/2016, due to their organising of a party for children at a camp for displaced people in rural Latakkia. Within the party, children sang well known traditional songs alongside music.

The members of the team denied the accusations put forward by the judge in his final sentence.