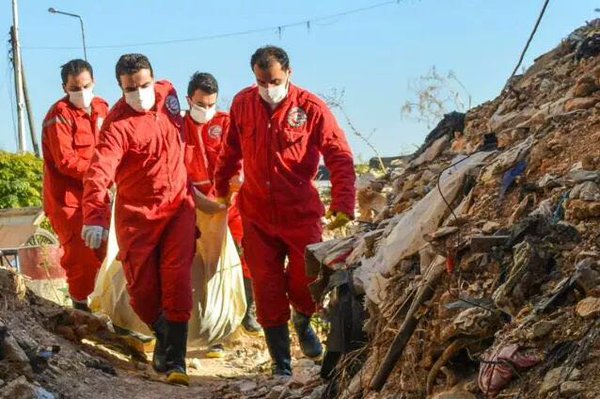 On Friday morning, the operation of swapping dead bodies and disappeared people, which had taken place after the armed opposition took over the village of al-Zara (southern rural Hama) came to an end. The operation lasted from between Wednesday morning till Friday.

The first phase of the swap which took place on Wednesday and Thursday allowed the Syrian Red Crescent to gather the dead bodies of 45 fighters of the Syrian regime in exchange for the regime’s release of 16 women and children they had kidnapped from the town of Tirma’la in northern rural Homs. The second phase, which took place on Thursday evening and Friday morning saw the release of 19 civilian prisoners from al-Zara in exchange for the release of 54 civilians which regime militias had kidnapped from the village of Khnayfis following the capture of al-Zara.

The process was delayed until the early hours of Friday morning after it was revealed that four people who were on the list of people to be released and who had initially been kidnapped in Khnayfis by the militias headed by Mahmoud ‘Afifa, had been killed under torture. Their bodies were handed over instead.

The four civilians are:

Media channels loyal to the Syrian regime covered the operation of the release of those kidnapped from al-Zara extensively. However, the same channels avoided mentioning the prisoner and bodies swap, sufficing with the story that the Syrian army had managed to release the prisoners.

Batallions of the armed opposition gained control of al-Zara- a village which is majority Alawite- in southern rural Hama on 12/5/2016. At the time, the Syrian regime claimed that the battalions had committed a massacre against the civilians of the village following their control of the area.