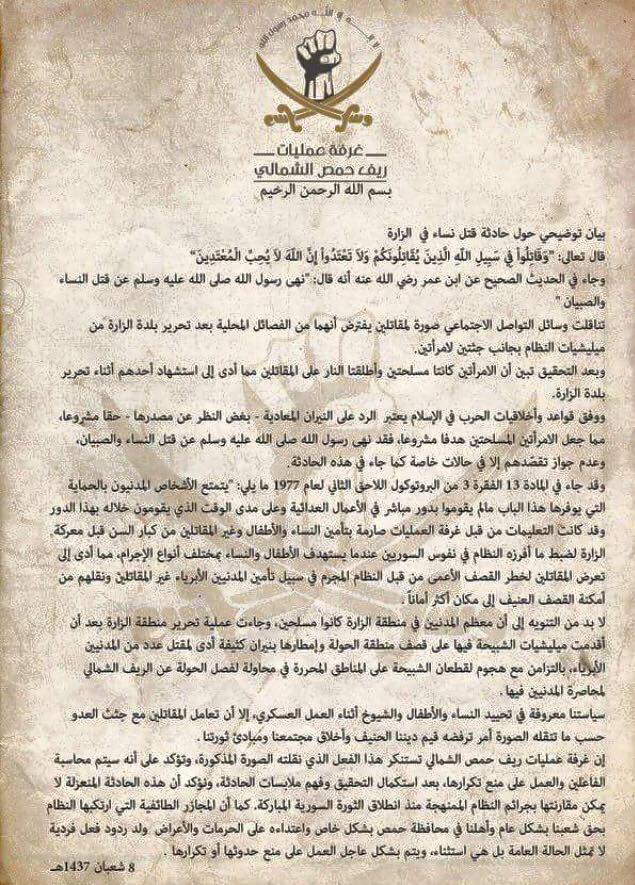 The press release published by Operation Room Northern Rural Homs in which it condemned an image of its fighters standing on two women’s bodies.

On Thursday 12/5/2016, groups of the Syrian armed opposition gained control of al-Zaza village in northern rural Homs. Shortly after the capture of the village, regime sources announced that the Syrian opposition had committed a massacre in which it killed 19 civilians of the village.

Al-Zaza is situated in northern rural Homs. The majority of its residents are from the Alawite sect.
In the days which followed the announcement of the “massacre” by the regime, news channels and media sources loyal to the regime published several photos which they claimed to be of the massacre which took place in the village.

“Operation Room Northern Rural Homs”- the group of battalions which gained control of the village, condemned a picture taken by two fighters from one of the participating battalions, in which armed men have their feet placed on top of the bodies of two women. In its press release, the operation room said that the two women were armed and began to shoot at the armed men. This was not denied by regime sources which said that women had participated in firing live ammunition.

However, media sources loyal to the regime used pictures of massacres committed by regime forces in Homs, Lattakia and Aleppo, in addition to images from Gaza, claiming that they were of the massacre in al-Zaza. 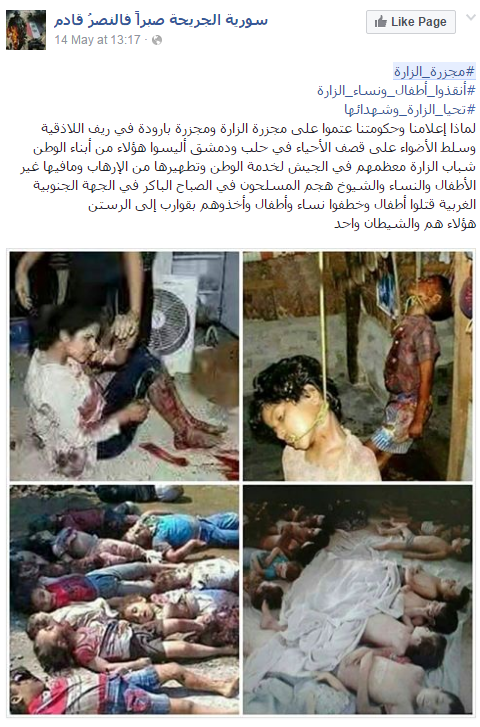 News channels and sources loyal to the Syrian regime used images from al-Ghouta and other massacres, claiming they were from al-Zaza.

The media coverage by regime news channels revealed huge disparity in its narration of the massacre. Whilst some channels reported that the number of victims were seven, others claimed it had reached 47.

In addition to this, news channels held interviews with “survivors” of the massacre which were described as being full of confusion and apparent contradictions. In an interview which took place on Saturday, all of the witnesses contradicted themselves in the short interviews they had. One of the witnesses said that he had saved his mother and took her to a safe place, then returned to his house to find armed men there. He then fought against them, and mentioned the victims he had lost at home, including his mother amongst them!

In all the interviews aired on the Syrian, Lebanese and Iranian channels, the testimonials provided by the witnesses agree with regards to the political message they are conveying, whilst disagreeing on the reality of what they experienced and lived through. The Syrian Human Rights Committee analysed interviews on al-Dunya TV, the Syrian News channel, Sama and al-Mayadeen channel, and found that all witnesses mentioned that the armed men had taken advantage of the truce and that the international committee was ignoring the massacre, revealing (in their opinion)that it was cooperating with the perpetrators of the massacre.