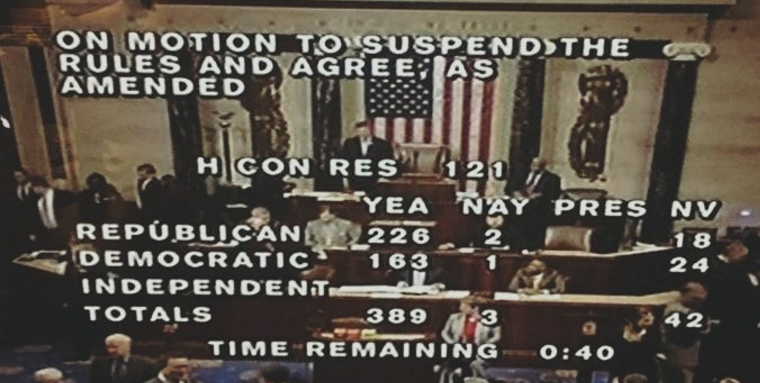 The American congress overwhelmingly agreed on a resolution which condemns the Syrian regime’s use of violence against civilians. The resolution, agreed upon on Monday evening, also calls upon the government of the United States and its allies to work towards an end to these acts of violence.

The resolution urges the US government to seek solutions for the protection of civilians in order to ensure humanitarian access to those that require it; as well as to support the efforts of compilation and analysis of documentation of the continuous human rights violations taking place in Syria, and which can help in the future prosecution of war criminals and perpetrators of crimes against humanity from amongst the Syrian regime and other sides in the conflict.

The resolution – named resolution 121- also urges the American president to direct the American delegation at the UN in encouraging the formation of a criminal court specific to the war crimes carried out in Syria and encouraging other countries to cooperate with the court and hand over any accused persons.

The resolution was voted for by 392 members of congress, with only three members voting against, and is the first time in which the American congress condemns war crimes committed by the Syrian regime and calls for a specific court to be set up for this issue.