You are here: Home / Articles & studies / Where’s the outrage on Syria? 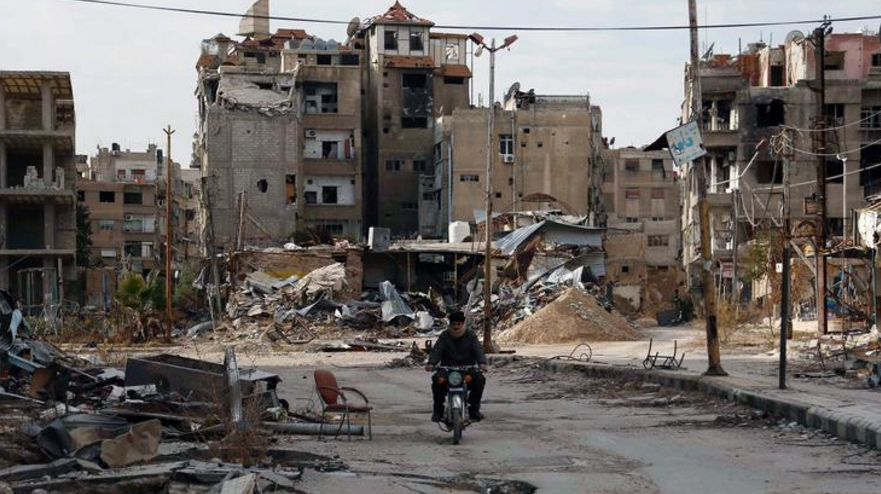 A man drives his motorbike past damaged buildings in Harasta, east of the Syrian capital of Damascus, on Feb. 10. (Abdulmonam Eassa / AFP/Getty Images)

A United Nations commission concluded this week that the Syrian government has engaged in crimes against humanity, including murder, rape, torture, imprisonment and enforced disappearance, as well as what it characterized as “extermination” and other “inhuman acts.” But is anyone listening?

Where’s the outrage at the photos of the gaunt and shrunken Syrian civilians who are starving in the besieged town of Madaya, where a 2-pound bag of rice now costs $150? At the encirclement and bombardment of the historic city of Aleppo this week by forces loyal to the government, threatening to cut hundreds of thousands more civilians off from food supplies? At the destruction of priceless Syrian antiquities, monuments, religious sites and historical works of art by Islamic State? At the masses and masses of desperate Syrian refugees now massed at the Turkish border seeking to escape the dangers posed by both the government and its opponents?

The devastation in Syria beggars belief — some 250,000 dead, more than 10 million uprooted in five years — yet the world appears unable to act. European powers dither over how many refugees they must accept. The United States vacillates over whether to become more deeply involved in its fourth conflict in the region since 9/11. Only Russia seems to have no such qualms: Its continued airstrikes, aimed at keeping the brutal President Bashar Assad in power, appear to be turning the course of the war.

Assad is a criminal despot who manufactured a ferocious civil war out of a series of relatively peaceful Arab Spring protests. There is little doubt that the world would be better off if he were to leave office tomorrow. But there seems to be a growing consensus that the top priority right now should not be Assad’s future, but finding a path to a ceasefire that will end the death and destruction, and eventually, with luck, lead to a durable peace.

That approach leaves unresolved crucial questions about Assad’s future. And it won’t be easy to achieve: The most recent effort to reach a diplomatic solution — the U.N.-sponsored peace talks that collapsed in Geneva last week — ended only a few days after they began, thanks to Russia’s ongoing air strikes, the fractious Syrian opposition and lack of resolve by the Western powers. Efforts to revive the talks before the end of the month will resume in Munich Thursday.

Yet there is no other choice than to continue seeking a ceasefire. And in the meantime, the true victims of the war should remain the world’s focus. Food and medicine must be provided to Syrians besieged by the government or trapped by Islamic State and other groups. Injured people must be evacuated from hard-to-reach areas of the country and aid convoys must be allowed unimpeded access. Attacks on medical facilities must be ended, and bombings of civilian areas, and the used of banned cluster munitions. Could new sanctions on those who are complicit in murder and torture bring relief to the Syrian people? What steps can be taken to more quickly move Syrian civilians out of harm’s way?

It remains astonishing that in the 21st century, after World War I and World War II, after the Holocaust and Darfur and Rwanda and Srebrenica, it is still permissible to hold a civilian population hostage, subjecting non-combatants to murder and torture and rape, without arousing the wrath of ordinary people all over the world.