You are here: Home / Editors choice / Hama 1982: A Turning Point and a Model being Replicated 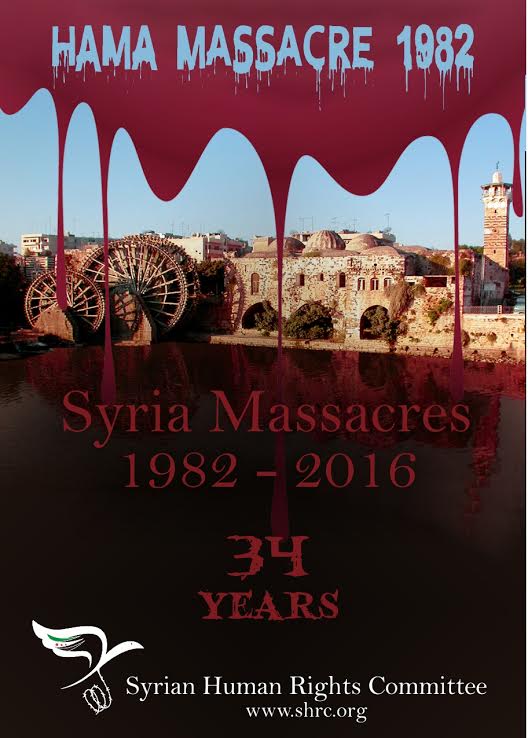 On this same day in 1982, forces of the Syrian regime during the era of Hafiz al-Asad attacked the city of Hama, committing- within 27 days- one of the worst humanitarian terrors witnessed by Syria in the previous century, and in which approximately 30,000 people were killed according to estimations made by the Syrian Human Rights Committee (SHRC).

At the time in which it took place, the Hama Massacre did not prompt many stances from the international community, which sufficed with making brief allusions to the massacre in reports only read by specialists. Even after it immediately took place, no political positions were taken, nor did the massacre garner any media attention proportionate to the crime which had just taken place. However, at that time, it was not possible for images and photos to be shared with the world as is the case now.

The international community did not simply remain quiet over the massacre, but received the criminals and their children with open arms in European and American capitals, continuing to build political, security and economical bridges with the regime which committed the massacre, and granting it international legitimacy. It is this same legitimacy which the regime is relying on today, representing Syria in international forums and in the issuing of official documents, despite the fact that the regime now controls less than 20% of Syrian land.

The stance of the international community at the time of the massacre taught the Syrian regime important lessons, primarily that, it could kill Syrians in any manner it wished and with the weapons it wished, as long as it served the interests of the major powers. The regime also learnt that it would not be held accountable for its crimes, and that its criminals would not even be tried at court. The effectiveness of these lessons were shown clearly in 2011 and until today, with the international community’s inability to issue any decree which condemns the Syrian regime, sufficing with the condemnation of crimes without pointing to the regime as the primary perpetrator.

The Hama Massacre was a turning point in the history of the Syrian regime, in which it portrayed its willingness to completely destroy a city and kill thousands of its residents in a number of days, despite their age, gender, and even their political opinions towards the regime. The massacre reflected the nature of the regime of Hafiz al-Asad- who did not hesitate in committing the most heinous of crimes against those who opposed him regardless of their rank- and provided a model to be reproduced when dealing with opposers. Indeed, the model was reproduced widely and on a scale much larger than that of Hama by multiple times, with the regime killing close to 300,000 people in the last five years, and destroying tens of districts in Aleppo, Homs, and rural Damascus, in the same way that it did in 1982.

Today, SHRC revives the memory of the Great Hama Massacre through its 34th anniversary. SHRC also confirms that the victims of this massacre, which lasted 27 days, have not taken even their moral right to this day, including the knowledge of the fate of tens of thousands who disappeared during the massacre, and the criminals being held to account for their crimes.

In 2015, the Major-General Shafeeq al-Fayaadh, a primary criminal of the Hama Massacre and several other massacres, died without being taken to account for his crimes in Hama and elsewhere, as have several other criminals. Meanwhile, the most prominent perpetrator of the massacre lives in Europe where he has been granted political security according to international law.

The Hama Massacre is an example of a war crime committed with the knowledge of the international community, and whose criminals have basked in its safety throughout these years. This example is being replicated in Syria, since 2011 and until today.