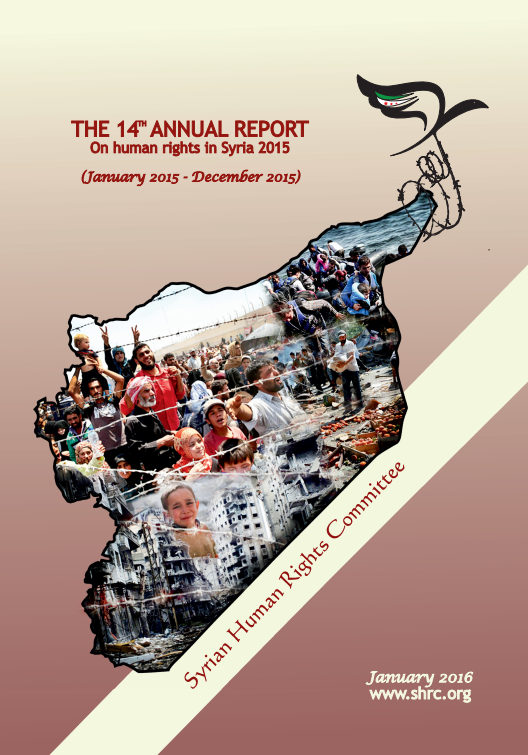 The Syrian Human Rights Committee (SHRC) published its annual report on the state of human rights in Syria for the year 2015. In the report, it documented the extensive violations committed by the various parties involved in the conflict which, as mentioned in the report, mainly are: The Syrian regime and its foreign allies, especially Russia and the Lebanese militias, ISIS, al-Nusra Front and the armed opposition brigades.

The report presents concise summaries of the violations committed in Syria this year, especially in: acts of genocide, targeting the media, targeting healthcare and emergency services, targeting relief work, targeting education, detention and torture, the displacement and refugee crisis and targeting houses of worship and historical sites. Each summary is then followed by the details of each incident documented in each area.

In its fourteenth annual report, SHRC documented 619 massacres committed throughout 2015, from these 80% were carried out by the Syrian and Russian Air Forces.

The report dedicates a separate chapter to targeting markets, a tactic which was extensively implemented, in an unprecedented manner compared to previous years, in 2015. SHRC documented 91 incidents in which popular markets and shopping areas were targeted in different areas in the country, mostly carried out by direct airstrikes.

The report also mentions that attacks on the education sector continued in Syria for the fifth consecutive year. The direct targeting of the sector in addition to the security conditions and general humanitarian conditions in all the targeted areas have caused a serious setback in the educational process. The report documented 156 incidents in which schools were targeted in 2015.

The annual documentation also shows how the medical and humanitarian sectors were made into direct military targets, especially by the Syrian regime and its foreign allies, despite the fact that such an offence is criminalised by all international charters, especially the Geneva Conventions. The Air Force targeted hospitals, clinics, points of care, ambulances, fire engines and emergency and relief teams. In some cases, the same hospital or point of care was targeted more than once throughout the year.

SHRC documented the death of 62 members of medical staff and 44 workers and volunteers in the civil defence services and the Red Crescent in 2015. In addition, 43 ambulances and 32 fire engines and civil defence vehicles were also targeted.

Furthermore, the report addresses the continuous cases of arbitrary detention, forced disappearance and lethal torture in detention centres carried out by the Syrian regime’s security services. SHRC documented 1124 cases in which detainees were tortured to death in 2015. However, the report also stated how incidents involving arbitrary detention and even lethal torture are difficult to document unless the families of the detainees find ways to seek them, whether by being informed of their fate or by being presented with pictures to identify them in.

In addition to the regime, ISIS was also responsible for cases of kidnapping, forced disappearance and torture. Unlike other parties involved in the conflict, ISIS records and airs the executions of its detainees and publishes them in high quality videos. It also uses unique methods in its executions which have not been used by other torturers in modern times.

The report also presents the continuous attacks on houses of worships by all parties involved in the conflict, especially the Syrian regime and its foreign allies. SHRC documented 192 incidents in which mosques were targeted and 11 in which churches were targeted throughout 2015. Many of the attacks on mosques took place whilst worshippers were present or leaving, especially during congregational prayers on Fridays and at nights in Ramadan, which indicates the intent to cause as much damage as possible to houses of worship and as much harm as possible to the civilians attending.

Moreover, the report addresses the attacks on historical and archaeological sites in Syria. The violations committed against these sites using air and artillery strikes were carried out mainly by the Syrian regime and its foreign allies. On the other hand, ISIS used explosives to deliberately blow these sites up or used the sites as execution sites.

The report states that the Syrian regime and its foreign allies were responsible for more than 90% of the crimes and violations committed in all fields and areas, as opposed to ISIS which was responsible for 5%-10%. The report also mentions that the international community’s insistence on disregarding the crimes and violations committed by the Syrian regime and its allies whilst merely insisting on focusing the spotlight on one perpetrator, which is ISIS, in a manner which presents the regime as an equal perpetrator or as the lesser of two evils, undermines the justice that the victims seek and deserve and will only widen the circle of extremism which continues to spread in Syria and in the region. This will also fuel extremist organisations with the moral support they need to lure more young people.