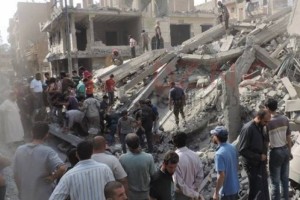 The city of Deir Ezzour was subjected to two massacres today, the first committed by ISIS, and the second by Russian war planes.

In the morning, ISIS targeted Harabish district, which falls under regime control, with mortar rockets. A number of rockets fell on a girl’s primary school, killing 10 students and injuring dozens of others.

Victims whose names were identified include:

In the afternoon, Russian war planes targeted a residential area in al-Humaydiah district, killing ten people, the majority of them women and children.