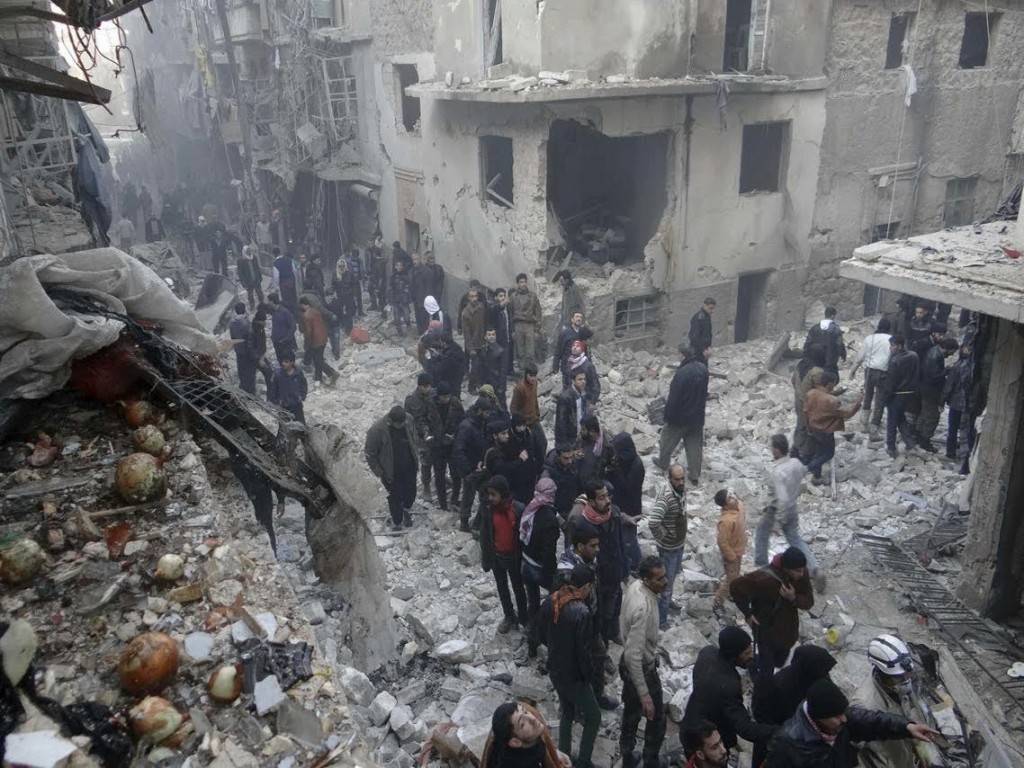 To this day, the international community has failed in condemning the Syrian regime for its use of barrel bombs

In 1948, Syria participated in the Universal Declaration of Human Rights, so that it would be a humanitarian tool combining all values which respect humanity, allowing humans to live with dignity and help them achieve their best in nurturing and developing their communities.

Since its inception 67 years ago, the declaration has been a fundamental pillar from which other human rights treaties and conventions have grown from. The declaration also led to the inception of thousands of international, regional and local bodies in order to protect and implement these rights, supposedly leading to a new age of shared human values for the first time in history.

However, the implementation of the rights affirmed by the declaration and the conventions and treaties which followed, have continuously collided with political interests. This has constantly limited the capacity of the legal system of human rights in implementing the standards it adopts in a just and effective manner.

The violations and crimes witnessed by Syria since 2011 and until today are a perfect example of the dilemma faced by this system on one hand, and the failure of the international community and its institutions in making human rights their priority on the other.

The specificity of Syria’s case is that it is the most prominent example of violations in our current media age. Despite the fact that numerous countries have witnessed violations of the same size and horror of what Syria has witnessed in the past five years, none were documented daily and in vivid detail as has been the case in Syria, where tens of thousands of activists inside and outside the country are documenting violations on an unprecedented and daily basis, using sound, image and written information, which is then uploaded onto social media.

In addition, the world’s attention is centred on the Syrian case unlike many other cases which did not garner such interest, turning the Syrian issue into one of the most important to discuss in all international meetings of this period, and being connected to hundreds of resolutions and decisions of the various committees of the United Nations.

However, this interest and the spotlight thrust upon Syria has not resulted in any real actions against these violations and war crimes which are taking place daily; and the Security Council- in its 13 resolutions, 10 statements and 49 reports regarding Syria- has failed to condemn the violations committed by the Syrian regime in a clear manner, despite the clear and plentiful documentation in the reports mentioned.

When analysing the actions of the international system with regards to the violations taking place in Syria, it becomes apparent that a great contradiction lies between the political interests of countries and the values they signed upon in human rights conventions. The legal system has actively worked to document the majority of violations witnessed in Syria, and its reports have made apparent that the Syrian regime holds the greater responsibility for the number of victims and the damage which has crippled Syria. Its reports have also exposed the regime’s cooperation or condoning of ISIS, and how it has consistently targeted groups which fight ISIS, whilst not targeting the organisation itself. And yet, this has not led to even one decree in which the Security Council clearly condemns the regime, in the same way that has been done with regards to ISIS.

Analysis also reveals that the documentation which the international system has undertaken, and which leaves no doubt that the Syrian regime is responsible for committing an unending series of war crimes and genocide, has not led to calls for the perpetrators to be tried at court, or even to be isolated. Instead, the international community has been putting its utmost efforts into working with war criminals through considering them party to the political process, and that all the various sides must work towards a political settlement alongside them.

The various decrees of the Security Council and the statements made by its international envoys for the Syrian issue have caused real setbacks for the human rights system. The insistence of the international community in denying a platform from which justice can be given to victims, and hope that the future will compensate for their violated rights- a future in which war criminals cannot escape from justice- has resulted in providing greater space to terrorist and extreme groups such as ISIS to spread their ideas within Syrian and wider society.