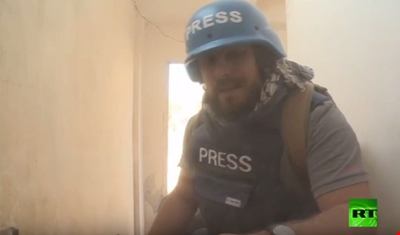 The official Russian channel “Russia Today” has announced that its correspondent Sargon Hidaya, the correspondent of “ART English” Roman Kosarev, and the correspondent of “Taas” agency Alexander Aalistratov, have all been injured in Syria. This happened when the vehicle transporting them in al-Daghmashliah on the route towards Jabal Zweik in rural Latakkia was attacked with anti-tank missile fire, fired from the town of Salma.

According to the channel, the three correspondents were taken to the Russian Air base hospital in Latakkia.