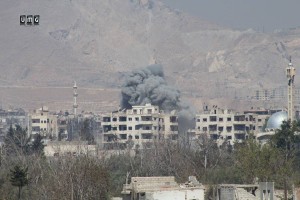 Air and artillery strikes on the cities of rural Damascus were renewed this Sunday with widespread air strikes targeting the cities of Douma, Jisreen, Arbeen, Masraya, Harasta and Madeera, and which killed approximately 50 people in the city of Douma alone.

The city of Arbeen was subjected to heavy artillery and mortar attacks, whilst Harasta was bombed by war planes, and four explosive barrels fell on Daraya.