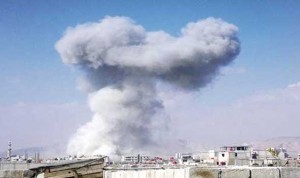 The city of Harasta (rural Damascus) was subjected to intensive bombing with heavy missiles and artillery, which targeted the local council buildings, as well as that of the civil defence and the civil police station of the city. Three people from the local council were killed as well as a member of the civil defence and a member of the police station, in addition to seven others that were killed when residential areas of the city were targeted.

Victims whose names were documented include:

In addition to two bodies which have not been identified as of yet.