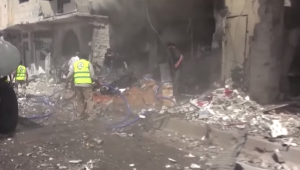 The popular market of Daraa al-Balad in the city of Daraa was bombed with explosive barrels, killing six people and leaving several others injured.

The attack on the market came in a bloody day in which the Douma market was also targeted, killing over 100 people.