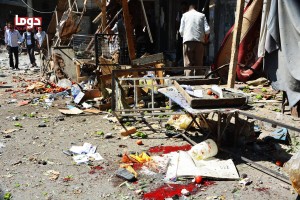 Twenty- seven were killed in the Market in Douma

War planes committed two massacres in the cities of Saqba and Douma (rural Damascus) after two popular markets were bombed within a short period of one another, killing 36 people and injuring approximately 150 others.

On Wednesday morning, the war planes first targeted residential areas in Douma with 5 vacuum missiles, including the popular market of the city. Twenty-seven people were killed and around 100 others were injured.

In Saqba, war planes targeted the city centre with two vacuum missiles, one of which fell on the popular market in the city and which killed nine people and left 50 injured.

These two massacres come a day after the vegetable market in Idlib was targeted and 15 people were killed as a result. 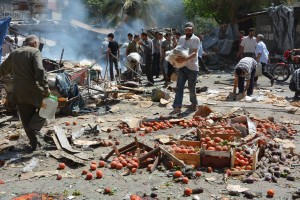