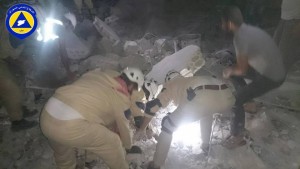 On Tuesday evening, international alliance war planes bombed the headquarters of an armed opposition battalion close to the Atmah refugee camp in rural Idlib, killing 20 people- 11 of whom were civilians- and injuring twenty others.

The air strike targeted the headquarters of the “Sunnah Army”, a unit belonging to “Jaysh al-Fath” which includes around 2000 fighters, and which used to be a part of “Ahrar al-Shaam” before it split from them around a year ago. The headquarters lie approximately 300 miles from the refugee camp.

In a press release issued on its website on Wednesday, the Turkish foreign office denied that the war planes which bombed Atmah had launched from the Incirlik military base in Southern Turkey.

The process of retrieving the dead bodies, undertaken by the civil defence, took around six hours, after which they managed to retrieve seven bodies.

The area which was targeted does not lie within areas controlled by ISIS.

The Atmah Refugee camp is the largest refugee camp inside Syria, and home to around 300,000 people, the majority of whom are from Aleppo, Idlib and Latakkia. 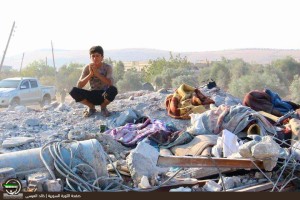 The effects of the bombing on the camp, as shown on Wednesday morning.