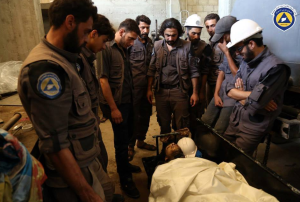 The civil defence team had headed towards the city of Saqba after an initial airstrike targeted the city this morning. Upon their arrival, war planes launched a second air strike on the city. Abul Khair was killed immediately.

Members of the civil defence buried their colleague in the city of Kafrbatna in the Eastern Ghouta.