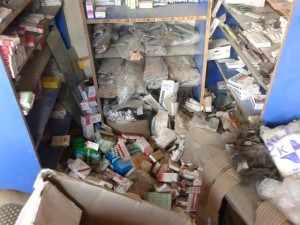 Material damage caused to the pharmacy opposite the hospital

The Syrian regime has continued in its targeting of hospitals and medical centres, with war planes targeting the Tib al-Hadith hospital in Mayadeen (Deir Azzour) today, killing three people and injuring several others. The air strike also caused material damage to the hospital.