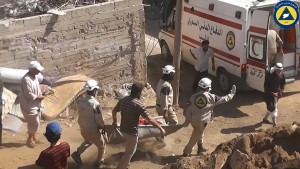 War planes launched a number of air strikes on villages in rural Idlib, killing approximately 20 people and injuring tens of others.

In the village of Kafrmoos, 15 civilians were killed, the following of whom were identified: Mohammed Ameen al-Hamidh (Abu Ratib), his wife, two of his daughters and two grandchildren, in addition to a daughter of Yasir al-Yusuf.

Areeha was also targeted with homing missiles leading to the injury 15 people, including:

The village of al-Tamani’ah was also subjected to air strikes, although no victims were documented.