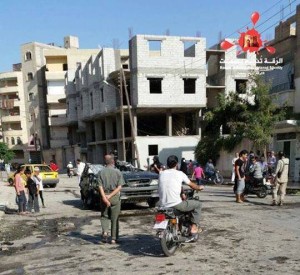 The car which was targeted by the international alliance strike

An International Alliance airstrike which targeted a vehicle belonging to ISIS in the city of Ar-Raqqah, led to the damage of the vehicle and the death of its driver- a Syrian national. In addition, seven civilians who were on the same street at the time of the strike were killed, due to the shrapnel caused by the explosion.

The strike took place in front of the Hamida al-Tahir school in Ar-Raqqah.
The following names of the victims were documented: