You are here: Home / Editors choice / Naval Mines: A New Weapon of Death 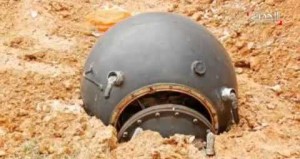 Since the beginning of the popular uprisings which began in Syria in March 2011, the Syrian regime has worked hard to use all possible weapons to quell any opposition. Alongside the use of light weapons, the use of tanks, mortars, gunboats, war planes and helicopters, Scud missiles, poisonous and chemical gases and explosive barrels have all been documented.

At the end of May 2015, the Syrian regime introduced a new weapon to the list, using it in a systematic manner: naval mines.

According to the brigadier general of the Syrian navy, Ahmed Rahal, a naval mine weights between 1000 and 13000 kg, meaning that it’s destructive ability is very high, especially as it’s designed to destroy military armoured ships. The Syrian navy owns between 6000 and 7000 naval mines of Russian origin, most of which have been stored for over 30 years in military stores specifically for military weapons. These military stores are in Hirmil, inside the mountains opposite Tartous on the coast. A second store is located close to Saqubayn, 10km north to Latakkia.

The mines were invented in the 1960s, and have been in Syria since the mid eighties.

One mine weighs approximately 200kg, compared to barrels which weigh about 1000kg each, which means that one helicopter can carry around 20 mines compared to only four barrels.

It is thought that the usage of mines at this time is due to two main reasons:

Firstly: that these mines are found in the Syrian navy’s stores and they haven’t been used since they arrived to Syria, therefore their usage will not incur any extra expenses on the Syrian regime which is currently suffering from severe financial problems and is unable to buy new weapons and supplies.

Secondly: the high destruction capability of these mines compared to explosive barrels. 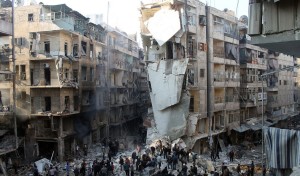 arbitrary weapons are responsible for most victims of the Syrian crisis

The Legal Stance on the Use of Naval Mines

The use of explosive barrels and naval mines as bombs fall in the category of indiscriminate weapons, which are completely prohibited in international law.

The first protocol of 1977 and the four Geneva conventions specify arbitrary attacks against civilians as:
1) Those which are not directed at a specific military target
2) Or those which use methods which cannot be directed to specific military targets
3) Or those which employ a method or means of combat which cannot be limited to their effects as required by the abovementioned “Protocol”, and therefore that will infect, in each such case, the military objectives and civilians or civilian objects without distinction

All three characteristics above apply to explosive barrels, as they do to naval mines, and one naval mine alone is enough to be classified as an arbitrary weapon.

The protocol describes “indiscriminate attacks” in paragraph 4/b of article 51 as:

An attack which may be expected to cause incidental loss of civilian life, injury or damage to civilian objects, or a combination thereof losses and damages occur, excessive in relation to what is expected to result in the concrete and direct military advantage.

According to the Rome Statute of the International Court for criminals, the use of indiscriminate weapons, such as barrels and mines is a war crime. This explains why the Syrian President Bashar al-Assad denies the use of these weapons unlike other weapons used. 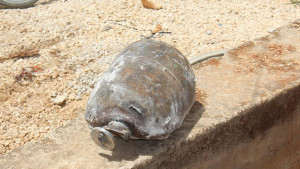 Naval Mines as an Arbitrary Weapon in Syria

The excessive use of naval mines in Syria began at the beginning of May 2015. They were documented to have been used primarily in Sahl al-Ghaab, as well as in rural Aleppo and rural Idlib.

The fundamental distinction between the processes of dropping barrels as compared to mines is that whilst a helicopter can drop 3-4 barrels only, it can drop 20 mines in one go.

It is incumbent to note that mines have been used in several Syrian cities previously although on a limited basis. However, they were not documented as a primary weapon, and they may have been used to test their use as a weapon similar to barrels.

An example of this is when the use of naval mines on Al-Maliha and the Eastern Ghouta were documented on 24/12/2012.