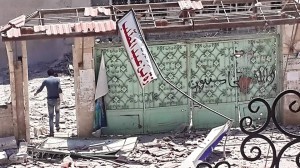 The Mosque of Hamza Ibn Abdul Mutalib in the city of Andan (rural Aleppo), was targeted by two explosive barrels whilst full of worshippers during the Friday prayers, leading to severe destruction of the mosque, the death of two worshippers, and the injury of dozens of others.

The two barrels fell shortly after one another on both sides of the mosque- a clear indication that the helicopter was attempting to target the mosque.

The moment in which the first barrel fell

The moment in which the second barrel fell.