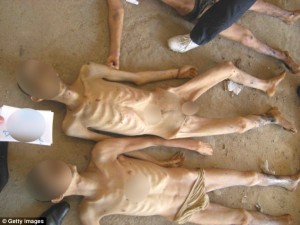 Tadmur Prison (Palmyra) is counted among the worst reputed prisons internationally, having witnessed unprecedented atrocities for at least two decades, some of which has not been documented, and whose perpetrators have not been taken to court till today.

Since its inception in 1997, the Syrian Human Rights Committee (SHRC) has worked on the case of Tadmur Prison, publishing a large number of reports and witnesses surrounding the prison in the previous years. Indeed, SHRC was the main, and perhaps the only source for all international organisations, which addressed the violations at Tadmur.

ISIS’ seizure of the city of Tadmur on the 22/5/2015 as well as their control of the prison has renewed the spotlight on the prison, the tragedies which took place behind its walls, and the fate of its prisoners. For this reason, we have produced this special report on the prison

According to a report published by Amnesty International in 2001, “Tadmur Military Prison has become synonymous with suffering. Conditions in Tadmur Prison are brutalizing and dehumanizing.”

And in a report smuggled by a group of ex- political prisoners in 1999, the prison was described as “unique amongst Syrian prisons as it was a punitive institution in the form of a concentration camp- a live demonstration of intimidation, terror, torture and killing, as well as a source of psychological, emotional and bodily humiliation. We faced unbelievable events and atrocities over 17 years, from early 1980 till 1996.”

The defence brigades which committed the Tadmur Prison massacre were led by Rif’at al-Asad. Rif’at has enjoyed international protection in Europe since he left Syria in 1984

The Tadmur Prison Massacre of 1980

On 27/6/1980, a bloody massacre took place in the heart of the Tadmur desert, perpetrated by militias of the Defence Brigades against Tadmur prisoners. Over 1000 prisoners were killed, murdered with bullets and hand grenades.

The massacre took place after the president Hafiz al-Asad survived an attempted assassination on 26/6/1980- a day before the massacre- by an element of the Republican guard.

The attempted assassinator managed to flee Syria, however 56 individuals from his family and relatives were arrested and killed.

The attempted assasination led to the accusation of the Muslim Brotherhood and the issuing of Law 49/1980 which came into effect 11 days after the event, as well as the massacre which took place the next day.

The horrific massacre was an act of revenge against Islamist prisoners in Tadmur prison.

The news surrounding the massacre remained vague, as is the case with most massacres committed in Syria during the eighties, until a group which attempted to assassinate the former Jordanian Prime Minister Madar Badran, among whom were some elements who had participated in the massacre, were detained in Jordan, 1981. They provided detailed testimonials on the massacre and those responsible for it during their interrogation, which was broadcasted on Jordanian Television.

According to the testimony of Sergeant Issa Ibrahim Fayadh (who was captured in Jordan and whose testimonial was televised), the group which set out to Tadmur Prison on the dawn of 27/6/1980 was from Brigade 40 (led by Ma’een Nasif, Rif’at al-Asad’s son in law) and Brigade 138 (led by the Lieutenant Colonel Sulaiman Mustafa) which are part of the Defence Brigades, led by Rif’at al-Asad, brother of Hafiz al-Asad. The group was led by Sulaiman Mustafa. They were transported to the prison yard by helicopter at 6.30am, split into six smaller groups, each of which headed towards different dormitories of the prison.

Despite the fact that several large massacres were witnessed in the eighties, this massacre was the first to be documented via the recorded testimonials of the criminals themselves, in addition to providing a clear example of the nature of Assad regime crimes- a regime which has no qualms in perpetrating brutal massacres against isolated detainees.

The testimonials televised on Jordanian TV.

Successive testimonials given by ex-detainees of Tadmur prison provide a long list of the methods of torture used across the years inside the prison, and which killed thousands of people on a daily basis.

Some of the testimonials describe torture practised in the prison which was unprecedented and had never been used in any other place around the world, as well as revealing unprecedented brutality in dealing with prisoners.

Jailers in Tadmur had full licence to kill prisoners during torture sessions; in fact, prison management ensured that all jailers took part in acts of torture.

Methods of torture used in the prison include beating with electric cables, whips and similar substitutes, throwing prisoners from high places until their bones broke, breaking the bones and skulls of prisoners by hitting them directly with military shoes and rifles, in addition to types of torture found in other Syrian regime prisons such as the German chair, Electrocution, and so on.

In addition to bodily torture, brutal forms of emotional torture were also inflicted upon prisoners, such as the constant cursing of prisoners, not allowing prisoners to see their jailers and those torturing them throughout their time at the prison, forbidding prisoners from speaking to one another, as well as other methods which aimed to degrade the human dignity of prisoners.

Among the most prominent of these testimonials is the “Narratives of the Shell” written by Mustafa Khalifa (Arabic), documenting his time as a Christian prisoner in Tadmur for 13 years.

Another important testimonial is that of a Jordanian detainee, Mohammed Saleem Hammad, who documented his time in the prison in his book “Tadmur: Witness and Witnessed 1980-1991”

Ex-detainee Abdullah al-Naji also wrote a book called “Blood Pools in Tadmur Prison”, in which he documented his time as an Arab prisoner in Tadmur Prisoner. He was arrested due to visiting an individual who was wanted by the Syrian security in his home in Damascus, and was consequently detained for 11 years.

The book, “At the bottom: two years in Tadmur Prison” was among the first books to document the suffering of Tadmur prisoners. The writer, whose name was issued under a pseudonym, detailed the realities of the life of an Islamist prisoner in Tadmur in the early eighties.