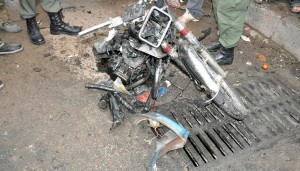 The remains of one of the motorcycles used in the explosion, as claimed by regime sources

Two explosions took place in the al-Zahraa district and al-Ahram street of Homs- two areas which fall under regime control- leading to the death of several people according to regime sources.

Sources claimed that the explosions took place due to the blowing up of two motorcycles, one close to the Masakin al-Shurta roundabout in al-Ahram street, and that- according to initial estimates- four people were killed and 24 injured.

SHRC has published a detailed report on the explosions taking place in Alawi majority districts in Homs during the last few years.