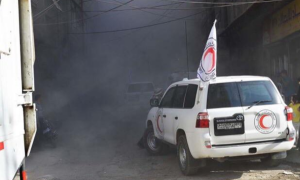 The moment in which the rockets targeted the convoy

Forces of the Syrian army have targeted a medical convoy in the city of Douma with mortar rockets, leading to the death of a Paramedic and causing material damage to the convoy.

The medical convoy- belonging to the World Health Organisation and the Syrian Red Crescent – entered into Douma following long negotiations between brigades of the armed opposition and the Syrian regime. The convoy, composed of three lorries and three Jeep cars held medicines not found in Douma as well as a dialysis machine.

The bombing killed Israa Yasir al-Habash, a volunteer in the emergency and disasters committee of the Red Crescent in Douma, in addition to the destruction of a large section of the convoy.

The Eastern Ghouta suffers from a sharp lack of medicines and food due to the siege imposed on it by the Syrian regime since the end of 2013 and until now. 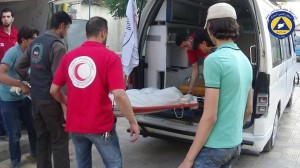 The body of the volunteer Israa al-Habash 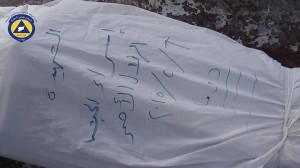