You are here: Home / Editors choice / Family Massacred in Hama 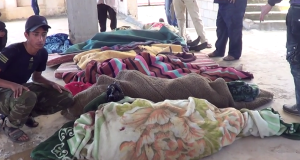 Victims of the massacre

Explosive barrel bombing on the village of Al-Sharka in rural Hama has led to the death of 16 people, among them 10 from one family. The bombing also caused widespread destruction among civilian homes in the area.

A video recorded by activists showed members of the Civilian Defence teams picking up bodies strewn across agricultural lands close to the homes.

Al-Sharka village lies close to the Shahshabu mountain- which is considered an extension of Jabal al-Zawiya (Idlib)- and is the path taken by displaced families from Sahl al-Ghaab across to rural Idlib.