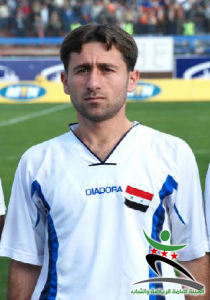 Syrian security apparatus arrested the footballer “Jamal al-Rifai” at the Syria-Lebanon border yesterday, as he was making his way towards Lebanon, taking him to an unknown destination.

Jamal al-Rifai (31 years) plays with the Jablah team. He has also played with the national team, as well as with Tashreen and Masfah Banyas.

The General Commission for Youths and Sports in Syria- an opposition body which is concerned with athletes and sportsmen- has held the Syrian authorities responsible for the safety of the player and called for his immediate release.