You are here: Home / Editors choice / Raids in Deir Azzour Cause 17 Deaths 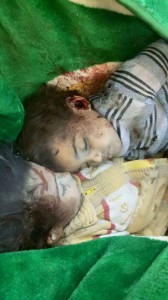 victims from the raid on Hatla

Regime warplanes have instigated several massacres in Deir Azzour today, following the targeting of residential areas in the city and in the village of Hatla.

Warplanes began by targeting the old airport neighbourhood. This was followed by the fall of several artillery shells, killing nine civilians and injuring dozens of others.

Helicopters also dropped three explosive barrels on al-Salihiya in the town of Hatla (eastern rural Deir Azzour), which led to the deaths of eight civilians. Their names are:

The names of the victims from the old airport neighbourhood were documented as follows: