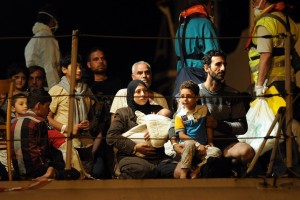 On Sunday 19/4/2015, a shipping boat carrying illegal immigrants attempting to reach the shores of Italy sunk in the Mediterranean, leading to the death of around 700 people with only 24 survivors that managed to remain on the ship.
It is thought that many of the immigrants on board were Syrians who were searching for a safe place in which they could live dignified lives.

The incident which took place on Sunday is considered the largest tragedy to date, increasing the number of people killed in the Mediterranean in 2015 so far to 1500 according to the International Organisation for Migration.

Previous years also saw a high number of boats sinking in the Mediterranean, the most prominent of which was a boat which sank at the shores of Tripoli (Libya) on 6/7/2014, and which carried 200 immigrants on board, as well as the boat which sank close to the Maltese shores on 10/9/2014, leading to the death of around 500 immigrants. This is in addition to a boat that sank in front of the Cypriot-Turkish shores on 23/11/2014, and which carried approximately 300 people on board. 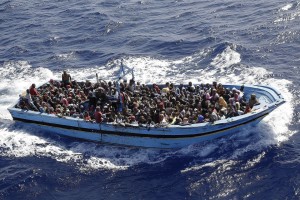 Last year, over 3500 people were killed as they attempted crossing the Mediterranean to reach European shores

SHRC has previously published a detailed report on illegal immigration, and the factors pushing Syrians to expose themselves to danger in order to reach the European shores. The report also reviewed the risks encountered by immigrants, including that of drowning to death.

SHRC expresses great concern at the current political discussions taking place among the European Union surrounding illegal immigration, in which there is an absence of talk on the main factor which is driving Syrians specifically to risk their lives and the lives of their families, and to sacrifice their limited resources through dealing with merchants of death in order to access asylum!

Remaining heedless of the enormous violations taking place in Syria and ignoring the perpetrators of these violations will only lead to more tragedies such as that of the Mediterranean boats, and which in the end, is a mere symptom of what is happening in Syria.

The continuing policies of the international community have led to the tragic humanitarian situation we are witnessing in Syria today, which is no longer just a Syrian issue, but a problem whose effects have reached and impacted different countries of the world, including the European Union.

Below, we mention some of the policies which led to the current situation. These policies should be revised before the EU comes to any serious conclusions regarding the issue of illegal immigrants:

• The International Community’s role in constantly and systematically ignoring the perpetrators of war crimes and crimes against humanity in Syria, and their refusal to name them or accuse them, thereby encouraging them to commit further acts. The Security Council’s decrees 2118 (27/9/2013) and 2209 (26/3/2015) are examples of this. This approach is unprecedented in the history of international law.

• The refusal of the international community to provide safe corridors inside Syria which would harbour Syrians and keep them safe from the threat of warplane bombing, including explosive barrels which have caused most deaths in Syria for the past two years as well as destruction of large areas inside Syria, meaning that families have no shelter to return to and have nothing to lose if they risk crossing the sea to seek asylum.

• The refusal of the international community to solve the problem of travel documents- an issue which the Syrian regime is using to blackmail Syrians and which has left hundreds of thousands of Syrians without travel documents or other identification documents, disabling them from the ability to leave in neighbouring countries.

The discussions surrounding the problem of illegal immigrants reaching European shores highlight a clear disregard from all sides in dealing with the main issue. Such attitudes will only result in short term and limited solutions.

In the same manner, discussions on the intake of immigrants reaching European (and non-European) countries for asylum is but a limited step in solving the refugee crisis, which has now risen to at least 4 million people. It is not in the capacity of any country or even a group of countries to take in all these refugees; rather, their return to their homes and to safety should be guaranteed, instead of assisting the Syrian regime in implementing its policy in driving them out of their country.

SHRC, whilst saddened by the increasing number of victims and that of the most recent tragic incident of the boat which sunk close to the Italian shores on Sunday, hopes that this incident will push the international community, and the European Union in particular, to review their stance towards the Syrian issue firstly, and to restore human rights to the forefront of decisions made concerning this issue. Indeed, human rights should be at the forefront of the stance of the international community, which should move towards a new approach which deals with the real issue at hand, and not its symptoms, and which puts the interest and rights of the human first.