You are here: Home / Editors choice / Massacre in Idlib Kills more than 30 Victims From One Family 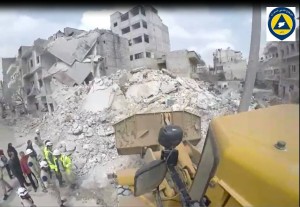 Warplane bombing on al-Shamaliya neighbourhood (Idlib- near Abdul Rahman Al-Ghafaqi School), led to the killings of 32 civilians from the Ramadan family consisting of the father, his children, grandchildren, sisters and brothers.

The victims of the massacre:

– Majida Ramadan, her husband and children. They reach a total of eight victims, including her grandchild and daughter-in-law.

– Khadija Ramadan with her children, grandchildren and her daughters-in-law, reaching a total of 15 victims.