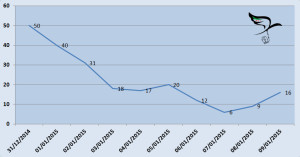 The snow storms which have hit the region in the past week have affected the humanitarian and living conditions of the inhabitants of the countries targeted by the storms. However, the effect on Syrians both inside and outside the country has been unprecedented, with the storms leading to the enforcement of a no fly warning which Syrians have been calling for over four years, transforming Syria into a safe area for a number of days with the documentation of the lowest number of deaths since April 2011.

At the same time, the Snow storms have led to the deaths of 19 Syrians due to the extreme cold or due to lack of proper heating.

The snow storms have led to a complete halt in air raids which have been carried out by Syrian war planes for almost three years, including a halt in the release of explosive barrels which warplanes drop on a continuous basis in several areas in Syria for over two years.

On Wednesday, 7/1/2015, the lowest number of victims were documented according to SHRC’s daily reports, with the killing of 6 people only due to reasons exclusive of the snow storm: one of whom was killed under torture, two due to a mortar rocket, one due to a sniper’s bullet and two opposition fighters killed during clashes with regime forces.
The number of victims began to rise once more on Friday 9/1/2015, and warplanes resumed their air raids on the morning of Saturday 10/1/2015, with the first barrels dropped on the cities of rural Daraa, where helicopters targeted the cities of al-Sheikh Miskeen, Daa’il and Tafas. 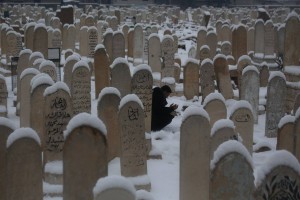 Although the warplanes and helicopters halted their raids, the highest number of deaths due to the weather since the beginning of the Syrian crisis was recorded this year, with 19 Syrians freezing to death, 11 of them in Lebanon, two in Jordan and seven in Syria.

On 7/1/2015 the Syrian shepherd Ammar Kamal (35 years) died in al-Rishaha in Shab’aa during the storm, as well as a Syrian child who was with his father and brother on the Tareeq al-Jardiah road to Shab’aa. Two elderly men died in Aleppo due to the extreme cold, and five others were documented to have died of the cold in refugee camps in Lebanon including two young girls one of whom was an infant in the Wadi Hameed camp close to Irsaal- where the Lebanese army has prevented Syrians from reaching shelter points and therefore is unable to rescue them.

And on 9/1/2015, the child Sami Haris (2 years) and his grandmother Amina Ridha (60 years), Syrians in al-Zatari in Jordan died after suffocating from the gas emanating from their heater. The remaining three members of the family suffered from suffocation and were transferred to hospital for treatment.

This data indicates the vulnerability of the living conditions faced by refugees in Lebanon, which has caused the death of this number of refugees and particularly among children. These conditions have been grounded due to the policies of the Lebanese government over the past three years, which has refused to acknowledge the existence of the refugee problem and has refused to set up any official camps for them, in addition to its refusal in offering them protection from militias loyal to the Asad regime. In fact, the Lebanese army itself has attacked the camps on a number of occasions with heavy weapons.