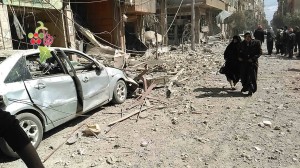 On Friday morning Warplanes targeted the city of Douma (rural Damascus) with four raids, which led to the deaths of six civilians, among them were two children. The raids led to widespread destruction and considerable material damage.

The effects of the destruction caused by the four raids.

One of the four raids which targeted Douma this morning