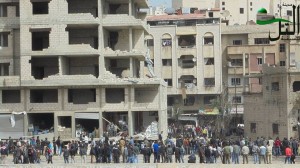 A car bomb exploded in the city of al-Tal (rural Damascus), which led to the death of a civilian and injured around 20 others.

The explosion took place near old al-Makhfar and caused material damage in the area of the explosion.

It is mentioned that Syria has witnessed a steady rise in car bomb explosions since last year, crimes recorded by unknown sides, where it is impossible to accurately identify which side is behind the crimes.