You are here: Home / Editors choice / First group of Assyrians arrive into Lebanon 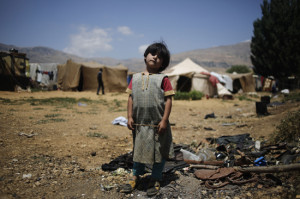 Around 20 Assyrian Syrians arrived into Lebanon yesterday from the area of al-Khabur in Al-Hassaka, following ISIS raids on their villages last week. Living areas have been secured for them in al-Waqia, close to the Mar Jarjas Assyrian church in Sad al-Bushria, east Beirut.

The Assyrians spent the whole night at the borders due to strict measurements carried out by the Lebanese authorities before allowing them in.

A priest at the church said that he had spent the whole night in contact with Lebanese officials in charge of securing the entry of the Assyrians, clarifying that they had “obtained a residence permit for a week”. This is bearing in mind that Lebanese officials had taken the decision to bar the entry of Syrian refugees into Lebanon since last December.

In a statement on Saturday, Nihad al-Manshouq, the interior minister, had said that he had “instructed the security agencies to facilitate the entry of Assyrian refugees coming from Syria into Lebanon”. He explained that the government’s decision to stop the entry of refugees into Lebanon included an exception on humanitarian cases, which applies to the Assyrians.

On 23/2/2015, ISIS kidnapped 220 Assyrians from 11 villages that it captured in the vicinity of Tal Tamar, in the north-western area of the Al-Hasaka countryside, following battles with Kurdish fighters in the area.