You are here: Home / Editors choice / A Syrian Family Burnt to Death in Al‪-Zaatari Camp 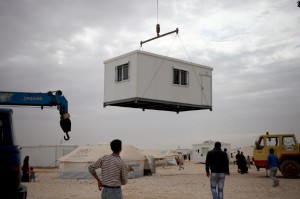 Around 80 thousand refugees live in the camp, most of them in similar caravans

A Syrian family consisting of the father, mother and two children died as a result of third degree burns due to a fire in their mobile home in al-Zaatari Syrian refugee camp, situated in al-Mafraq (northern Jordan).

According to the Jordanian Civil Defense Directorate, the fire broke out at 5:30am on Monday morning in three adjacent caravans as a result of a gas leak, which led to the deaths of a family of four members; Awad (45 years old), his wife Afaf (40 years old), their son Mahmoud (10years old) and their daughter Rawa (6 years old), and three other members of the family also suffered from breathlessness.

Previously, al-Zaatari camp has witnessed similar incidents in previous years. The latest was on 14/12/2014, where two children died and three members of a family suffered severe burns after a fire broke out at their mobile home caused by a candle.