You are here: Home / Editors choice / Series of Massacres in Eastern Ghouta leave more than 50 victims 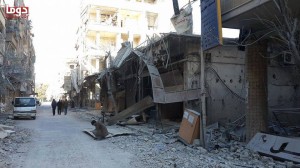 The market area in Douma after the air raid today

Army warplanes and helicopters committed a series of massacres in the Eastern Ghouta today, in which over 50 people have been killed till this hour.

In the city of Kafrbatna in the Eastern Ghouta, the popular market was subjected to shelling by rockets, killing 26 people (till now) and injuring over 100 others.

Warplanes also targeted the city of Douma with more than 30 air raids with missile vacuums, killing at least 23 and injuring over 150 civilians.

This is whereas the city of Saqba was subjected to shelling by warplanes, killing at least five civilians.

Even as civil firefighters rescued victims, air raids targeted two ambulances, destroying them completely and injuring all of the medical staff.

Names of victims can be found in the Arabic section of the website.