You are here: Home / Editors choice / Thirty three years on the Hama Massacre: The Criminals Remain Outside the Realm of Justice 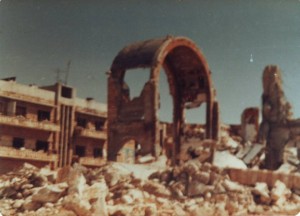 On the 2/2/1982, forces of the Syrian army began targeting the city of Hama, in an attack which lasted 27 days and included a continuous series of massacres on different districts of the city, leading to the killing of approximately 30,000 civilians according to SHRC’s calculations, among them around 10,000 whose fate has not yet been uncovered.

Army forces and militias closed off the city completely and cut off all the landlines, which meant that the news of the massacre was cut off from the outside world until all killing had ended. Due to this, the documentation of what happened during the massacre depends on survivor testimonials. In addition, very few photographs are available. This is because it was not possible to take photographs in the heavy presence of security witnessed by the city during and after the massacre, in addition to the lack of cameras across Syrian society at that time.

The massacre also included substantial arrest campaigns, and it is thought that most that were arrested in this period were subjected to liquidation in the detention centres.

In addition, the massacre caused a number of long-term violations, especially as the state did not acknowledge the massacre. Consequently, victims were not compensated for their financial losses, and thousands of families faced social and legal issues due to not knowing the fate of their sons. In the case of whole families being wiped out, relatives were unable to inherit or follow up on property left behind. This is in addition to problems of marriage and lineage, due to the absence of fathers and not knowing the fate of husbands etc…

The most prominent of events which took place during the Hama massacre include:

Despite the scale of the massacre, the international community did not take any steps to take the criminals to account or even document what happened; till today the main powers have not revealed any satellite pictures which document the massacre, or any documentation which will help in the documentation process.

In addition, Rif’at al-Asad , the commander of the defence brigades which took part in the massacre and the brother of the president at the time- Hafiz al-Asad- enjoys protection in Europe, where he has resided since the eighties. Human rights groups have not been able to pursue him legally due to their inability to bring the victims to Europe and due to his possession of huge financial assets which provide him with legal protection in Europe. This is in contrast to human rights groups that have no money and resources- which they would require- in order to pursue him legally.

The international community’s policy in allowing murderers protection from punishment since the eighties has impacted directly on the numerous war crimes witnessed by Syria since 2011, with the regime repeating the same strategies it employed during the eighties.

On the thirty third anniversary of the massacre, SHRC emphasises that war crimes have no statute of limitations. SHRC also emphasises that disabling the principle of accountability, and the lack of respect that the international community has for human rights both historically and currently, has created the foundations of extremism witnessed in Syria and the surrounding area. This extremism will continue as long as the international community does not change its policies.