You are here: Home / Editors choice / Helicopters Cause Massacre in Al-Hassaka 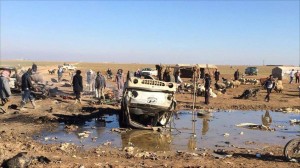 Bombing by Syrian regime helicopters on the village close to Tal Hamees in Al-Hasssaka led to the deaths of 79 civilians and injured 120 others.

The helicopters began dropping two explosive barrels on the sheep market on the village of al-Khansa while civilians gathered in the market.

Due to the absence of medical centres in the region there has been an increase in the number of victims, and deterioration of the wounded, majority suffering from severe burns. As the area is surrounded the injured victims cannot be transported to the northern regions for treatment, where some medical centres are available.

The village is under ISIS control however there are no ISIS headquarters in the village, and all the victims of the massacre were civilians.

The Syrian regime has declared responsibility for this massacre however they claimed to have targeted ISIS headquarters. The official Syrian News Agency (SANA) stated that ‘The army and armed forces have killed tens of ISIS terrorists in the village of al-Khansa southern Tal-Hamees in rural Al-Hassaka in an operation planned against the terrorist organisation of ISIS in al-Khansa southern Tal-Hamees’. It also added ‘the operation resulted in the deaths of dozens of terrorist ISIS members, who used the place known as the sheep market to trade stolen oil’.