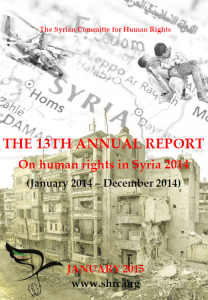 The Syrian Human Rights Committee (SHRC) published its annual report of 2014, a year that witnessed violations committed against the Syrian people reach a dangerous level of continuity and repetition to the extent that they no longer attract public attention. Even crimes such as massacres and the use of internationally prohibited weapons have become part of the Syrian people’s daily lives.

The report, which is the 13th annual report since 2001, shows continuity in all the violations committed last year and in some cases, an increase in these violations. This excludes the use of chemical weapons, which was replaced this year by the use of poisonous gas.

SHRC stated in its report that 2014 was the bloodiest year since the beginning of the Syrian uprisings, with more than 60.000 Syrians killed this year alone. However, international and local reactions to these on-going violations were weaker than ever before.

According to the report, one of the main factors that played a major role in Syria this year was the presence of the Islamic State in Iraq and Sham (ISIS). The group committed the largest massacre of the year when it attacked the al-Sh’eitat tribe in August. The second largest massacre, in terms of numbers, was when Ar-Raqqah- an area controlled by ISIS- was raided by the Syrian Air Force on 25th November.

Furthermore, Syrians faced the threat of car bombs this year, with the report documenting 19 cases in which car bombs were used, nine of which targeted civilians in mosques during Friday prayers which are performed in large congregations.

The regime’s forces also continued its arbitrary detentions and crimes of forced disappearance against opposition members and suspected opposition members. Brutal and lethal acts of torture and executions are still practised on detainees, who are deprived from medical care and food. In some cases, prison management even executed detainees infected with contagious diseases inside prisons and detention centres.

Similarly to 2012 and 2013, Syria was the most dangerous country in the world for journalists in 2014. Two main parties were responsible for attacking journalists: the Syrian regime and extremist groups, especially ISIS. The armed opposition brigades had a very limited role in this. SHRC recorded the death of 19 journalists in 2014, 7 of whom were non Syrians, and the death of 51 Syrian media activists.

As a reflection of all the violations being committed on the ground in Syria, the displacement and refugee crisis escalated dramatically in 2014 compared to the previous years, to the extent that Syria was the top country of origin among asylum seekers internationally and the top country of origin of displaced persons. Syrians also came second in refugee numbers, following refugees from Afghanistan.

According to the report, the international community’s lack of serious and firm stances towards the war crimes and crimes against humanity committed by the Syrian regime have contributed to the tragic and bloody crisis Syrians witnessed in 2014, and which is expected to continue to in 2015.

In its report, SHRC demands that the international community fulfil its role in ensuring that all criminals are held accountable rather than be left unpunished, and looks forward to an end to this humanitarian crisis that has been escalating for 4 years.